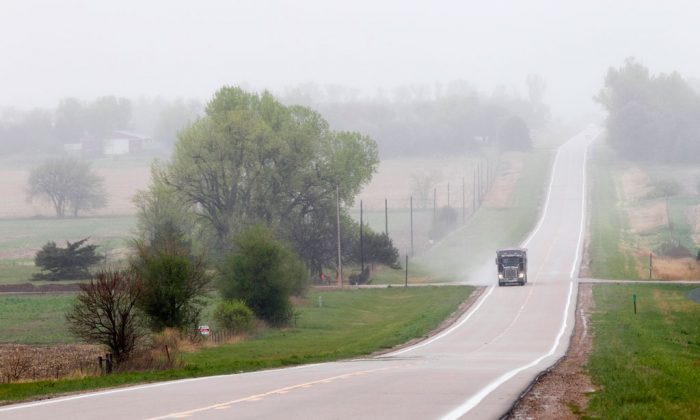 A truck traveling along highway 14, several miles north of Neligh, Neb., near the proposed new route for the Keystone XL pipeline, on April 19, 2012. A bill to approve the Keystone XL oil pipeline cleared a key Senate committee Thursday, setting up a fight next week pitting newly empowered Republicans against President Barack Obama and Senate Democrats. The Senate Energy and Natural Resources committee moved the bill closer to the floor by a 13-9 vote. Sen Joe Manchin of West Virginia, one of six Democrats sponsoring the bill, was the only Democrat to support it in committee. The House will vote on its version of the bill Friday, and is expected to pass it easily. (AP Photo/Nati Harnik)
Environment

Obama is so loath to make the call that deliberations have entered their sixth year, nearly as long as he has held office.

He has blamed the delays on bureaucratic formalities and parochial issues in Nebraska, even when skeptics claimed that the politics of Obama’s re-election race in 2012 were a more accurate explanation.

That campaign is past, the Nebraska issue is settled and a bipartisan bill forcing the pipeline’s approval may soon reach Obama. Those on opposite sides of the debate just want the president to decide.

“It’s time for the State Department and the president to make a decision on the Keystone XL pipeline — however they decide — because six years is beyond long enough,” said Sen. Heidi Heitkamp of North Dakota, among the Democrats supporting the pipeline.

In April, just as the State Department’s review was nearing an end, Obama suspended it. The department has jurisdiction because the pipeline would start in Canada.

The Nebraska Supreme Court tossed out the lawsuit, clearing the way for the pipeline to snake through Nebraska as previously envisioned.

The White House cited uncertainty about the pipeline’s route, spurred by a Nebraska court challenge.

On Friday, the Nebraska Supreme Court threw out the case, clearing the way for the pipeline to snake through the state as envisioned.

The State Department said it would pick up its review where it left off. It was unclear how long that review will last.

Republicans and some Democrats don’t want to wait.

Now in charge of both the House and Senate, Republicans are speeding a bill that would authorize construction of the 1,179-mile pipeline. It would carry more than 800,000 barrels of crude oil a day from Canada to refineries along the Texas Gulf Coast.

The House approved the bill Friday, ending the first week of the new Congress. The Senate planned a test vote on an identical bill Monday, hoping to get it to Obama quickly.

The House approved the bill Friday — one of the first bills taken up by Congress in 2015.

Obama has repeatedly threatened a veto, saying Congress must not circumvent the executive branch’s authority.

So far, Republicans haven’t shown they have the votes to override a veto.

Obama believes the project has becoming a proxy battle for the broader debate over global warming.

“A vote against Keystone sends the signal that our government is taking the science of climate change and risk analysis seriously,” said Sen. Martin Heinrich, D-N.M.

Outside the White House on Saturday, dozens of people rallied in support of Obama’s pledge to veto any legislation approving the pipeline.

The energy industry and business groups say Obama is jeopardizing an $8 billion project that could create thousands of jobs.

Obama has said he will only allow the pipeline if it won’t lead to increased carbon dioxide emissions. He also is skeptical of claims by supporters that the pipeline will create jobs or lessen U.S. dependence on foreign oil.

“I think that there’s been this tendency to really hype this thing as some magic formula to what ails the U.S. economy,” Obama said in a December news conference.

For Obama, the GOP’s attempt to force action is a sign of his diminished leverage over Congress in his final two years.

Sen. John Hoeven, R-N.D., who is sponsoring the Keystone bill in the Senate, said approving the pipeline would be a good-faith measure that would make it easier for Obama and Republicans to compromise on other fronts.