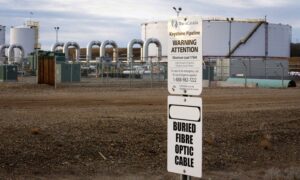 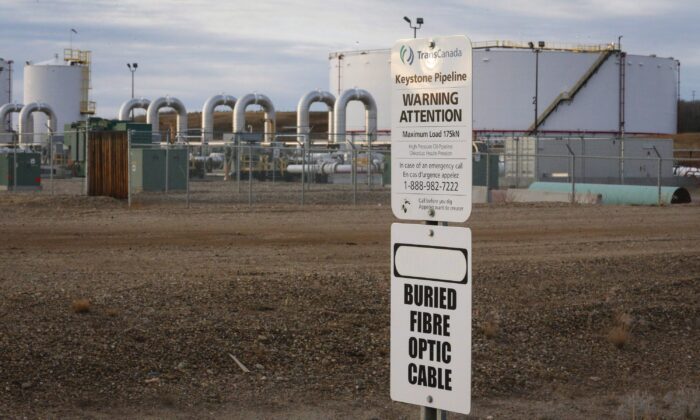 Keystone XL pipeline facilities are seen in Hardisty, Alta., in a file photo. The now-cancelled pipeline would have carried oilsands crude from Hardisty to the U.S. Gulf Coast. (Jeff McIntosh/The Canadian Press)
US News

The cancellation of the Keystone XL (KXL) pipeline has made a tough year more difficult for Carter Knox, a fourth-generation pipeliner who says that for people like him, it isn’t just about losing a job.

“It’s not really a question of whether or not that’s what we’re going to do in our lives. It’s more so this is the family trade. It’s in our blood,” Knox told The Epoch Times. He started welding and practicing at 6 years old. He got his union book a month after graduating from high school.

His last pipeliner job finished in January 2020. Then the pandemic hit. The 22-year-old stayed in his hometown in Corinth, Kentucky, and had to tap into his retirement savings to feed his family, including his 3-year-old son. He was hoping to be able to work on the KXL pipeline in the spring before a presidential executive order rescinded the permit on Jan. 20, 2021.

He is a member of the Pipeliners Local Union 798, which has gotten the KXL pipeline jobs. It’s a prestigious local union with high standards, Knox said. Union members pride themselves as the most extensively traveled and “the best of the best.”

Being a pipeliner is a craft that takes decades to perfect, according to Ashly and Tim Latter, founders of AmericanPipeliner.com. They keep track of pipeline projects every week for the website’s business organization members.

There are four types of pipeliners: welders, machinery operators, teamsters who drive the trucks, and laborers who help on the ground. According to the Latters, a typical career path involves starting as a laborer, then progressing to an “oiler” (someone who oils the machines before operators work on them), then earning a seat to run a piece of machinery, then moving on to perhaps become an assistant foreman.

Tim Latter told The Epoch Times that the jobs might be seasonal, but they aren’t temporary. “Those are people’s careers for their whole life,” he said. Pipeliners are “gypsies;” they go back to their hometowns in winter and travel to their job sites in spring. They take pride in what they do. “Ain’t nothing finer than a pipeliner!” Many are multi-generation pipeliners. Tim is a second-generation and Ashly is a third-generation.

These pipeliners will now have to stay in their hometowns, making do with local jobs if they are lucky. Knox has been working local jobs, but they pay less than half of what he normally earns. Pipeliner jobs pay around $100 per hour per welder, he said. Locally, he and his uncle team up and charge $50 per hour for two people. According to Ashly Latter, the skills are so specialized that they aren’t easily transferrable to other industries and positions.

Having tracked industry projects for more than six years, the Latters said that the overall trend of jobs has been going down. Jobs initially declined due to the increasing difficulties of obtaining permits for the pipeline projects. Then the pandemic hit and put a brake on energy demand. Now things are coming to a “complete halt.”

“President Biden takes over. The first thing he does is to kill the Keystone XL pipeline. It is just absolutely mind-blowing that he would do that for political reasons,” Tim Latter said. “We’ve been working on it for over 10 years now. And he just decided to halt that, and of course, that crushed so many jobs.” He said he would have preferred the current administration to establish something new and allow a transition instead of a total cancellation.

AmericanPipeliner.com estimates that 8,000 to 11,000 jobs were lost directly due to the cancellation of the KXL pipeline, in line with estimates from the Association of Oil Pipe Lines (AOPL). “Killing 10,000 jobs and taking $2.2 billion in payroll out of workers pockets is not what Americans need or want right now,” Andy Black, AOPL president and CEO, said in a statement.

In addition to the sheer number of job losses, the Latters said that the economic impact is huge for the communities that KXL would have gone through.

In Rock Springs, Wyoming, for example, the pipeline industry supported the creation of local recreation centers and community centers, permanent local enhancements that remained after the pipeliners moved on to a different location the next year.

“It was unfortunate that the executive order rescinded our permit, and our next steps are still being evaluated. We do believe Keystone XL is important and would be the safest way to transport energy across North America,” Terry Cunha, spokesperson of the KXL developer TC Energy, told The Epoch Times.

Cunha said no material distance of the KXL pipeline had been built within the U.S. border. Since the permit was revoked in 2020 by a federal court in Montana, the first U.S. state the KXL project would have traveled through, TC Energy hasn’t built any KXL pipeline in the United States. Instead, it has proceeded with building the pump stations that ensure enough power to push the crude oil through the pipeline. While the immediate impact was about 1,000 construction jobs, TC Energy had planned to ultimately employ 11,000 men and women throughout the pipeline construction, Cunha said.

Knox said that in addition to the mainline construction, smaller projects will be affected as a result. “What about the 50,000 that are building the lines off the mainline towards houses and cities and towns?” he said.

Calgary TV news reported that some Alberta legislators had suggested a potential U.S.–Canada trade war in the wake of the KXL cancellation.

The Latters said that if the Keystone XL pipeline project doesn’t continue, Canada could significantly reduce its oil sales volume to the United States, driving up energy costs. Tim Latter said that striking a balance between oil supply and environmental protection will be necessary.

He added that an overemphasis on protecting the environment would be equivalent to attempting to fix the supply side while ignoring the demand. “It’s naive to think that we’re going to use wind and solar to meet the energy demands that we require,” he said.

A pipeline isn’t the only way to transport crude oil. Forbes, in a 2018 article (“Which Is Safer for Transporting Crude Oil—Rail, Truck, Pipeline or Boat?”), ranked pipelines the second most impactful to the environment, compared to trucks, rail, and boat.

According to Knox, on every pipeline project, about 30 percent of the crew work on reducing environmental impact. Every pipeline is examined by X-ray to make sure there are no defects or cracks. The pipelines are buried deep underground. The minimum requirement for a 24-inch diameter pipe is 1 1/2-times deep, which is three feet. The pipelines are usually buried much deeper than the minimum requirement. The topsoil is removed, set aside, and restored after the pipelines are laid. Then grasses are planted.

“If you go to a pipeline ride away six months to a year after it’s been completed and finished, there won’t be any evidence. None. It will just be a clear straight path of grass, about 75 to 150 feet wide, typically just running straight through the woods,” Knox said. In-line inspection “smart pigs” are used to run frequent checks on pipelines for defects, and valve pressure is monitored at all times. Small segments of new pipelines can be automatically shut down if oil pressure irregularities are detected. Knox and the Latters said that if people are really concerned with pipeline safety, they should ban all the existing pipelines, but that’s not happening. In fact, getting a permit to repair an existing pipeline may be more difficult than getting a new pipeline permit, Knox said.

The Sierra Club, a grassroots environmental organization that claims 3.5 million members and supporters on its website, celebrated the KXL pipeline cancellation on Jan. 20: “Today’s rejection of Keystone XL will be a huge and hard-fought victory for our communities, clean water, and climate. When this pipeline was proposed, it was a foregone conclusion that it would easily be approved and constructed. The fact that it still hasn’t been built over 12 years later, and that later today it will be rejected for good, is a testament to the dedication and tenacity of a nationwide movement of frontline communities, Indigenous leaders, and environmentalists working together to insist that our future is not worth sacrificing for a dirty tar sands pipeline. We applaud President Biden for listening to these voices and rejecting this terrible project once and for all.”

The club was one of the organizations that sued the Army Corps of Engineers over its approval of the KXL pipeline in July 2019.

Alex Epstein, an energy expert and the author of “The Moral Case for Fossil Fuels,” told The Epoch Times that pipelines became an easy target because of their large impact on the environment. The KXL pipeline cancellation was a victory of the “net-zero movement, which is the movement that says that we should eliminate any impact on climate at all costs,” he said. “And that goal of net-zero has become a religious goal.”

He added that even solar and wind power involve carbon dioxide emissions because the process “involves fossil fuels mining, processing, transportation, and backup.”

The Latters mentioned that many pipelines were built during the Obama administration, although the KXL pipeline was somehow targeted as a “poster child.” The politicians made decisions to look good to their voters. Soon, cooler heads reasoned that pipelines were necessary to support the energy infrastructure for the country. Tim Latter hopes for the same to happen with the Biden administration.

“If you guys want gas, you’re going to have to let us do our thing and build our pipelines. It’s that’s what it comes down to. Or you can pay to have it trucked into your mountain and be paying four or five times as much,” he said.

Knox hopes that when energy shortages wind up happening, legislators will realize the need for change. Such cost upticks might be visible at gas pumps or on utility bills in six months, Ashly Latter said. Then, reality might hit.

“Reality has already hit,” Epstein said. “Green Energy is failing around the world. In the UK, it’s causing heating prices to go up so much. You have more and more people huddling in buses and libraries all day, just to keep warm. In Germany, it has doubled electricity prices in the last 20 years. And that’s just with small percentages (10 to 30 percent) of solar and wind.