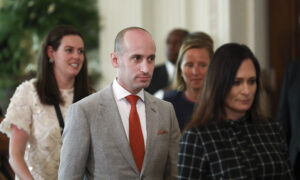 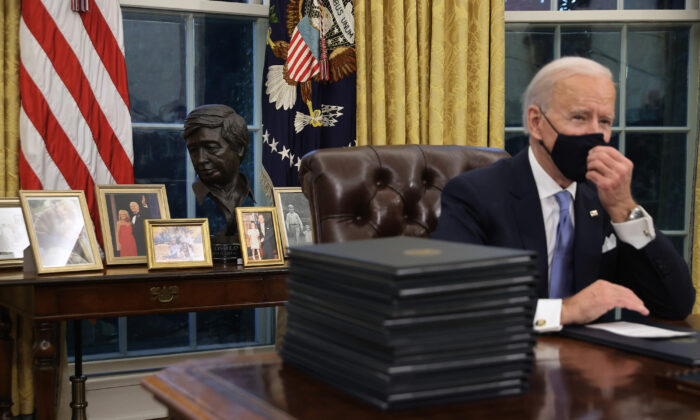 President Joe Biden prepares to sign a series of executive orders at the Resolute Desk in the Oval Office in Washington, on Jan. 20, 2021. (Chip Somodevilla/Getty Images)
US News

Keystone XL President Richard Prior said over 1,000 jobs will be eliminated in the coming weeks.

“We will begin a safe and orderly shut-down of construction,” he said in a statement to The Associated Press.

According to the Association of Oil Pipe Lines’s CEO Andy Black, the move is tantamount to “killing 10,000 jobs and taking $2.2 billion in payroll out of workers’ pockets [and] is not what Americans need or want right now.”

The pipeline was first proposed in 2008 but reached a snag under the Obama administration. President Donald Trump revived the project and has been a strong proponent of the measure—with the support of Canadian Prime Minister Justin Trudeau.

“We are disappointed but acknowledge the president’s decision to fulfill his election campaign promise on Keystone XL,” Trudeau said in a statement on Wednesday. Trudeau said he spoke with Biden in November over the phone, saying the pipeline is a key priority meant to expand oil exports in Canada, which has the third-highest oil reserves in the world, to the United States.

“Despite President Biden’s decision on the project, we would like to welcome other executive orders made today, including the decisions to rejoin the Paris Agreement and the World Health Organization,” Trudeau added, referring to several of Biden’s day one executive orders.

“Workers in Alberta, Saskatchewan, and across Canada will always have our support. Canada is the single-largest supplier of energy to the United States, contributing to U.S. energy security and economic competitiveness, and supporting thousands of jobs on both sides of the border,” Trudeau said. He did not say whether the Canadian government will try to engage with the United States to restart construction of the project.

Alberta, Canada, Premier Jason Kenney said the cancellation of Keystone XL’s construction isn’t “how you treat a friend [and] an ally.”

“It is an insult directed at the United States’ most important ally and trading partner on day one of a new administration,” Kenney said in a statement. “The leader of our closest ally retroactively vetoed approval for a pipeline that exists and which is co-owned by Canadian government, directly attacking by far the largest part of the Canada-U.S. trade relationship, which is our energy industry and exports.”

“President Biden’s decision to reject the Keystone XL tar sands pipeline on his first day turns the page on a 12-year fight over the energy future of our country,” said Anthony Swift, director of NRDC’s Canada project, earlier this month. “It sets the stage for a more prosperous future powered by clean energy.”