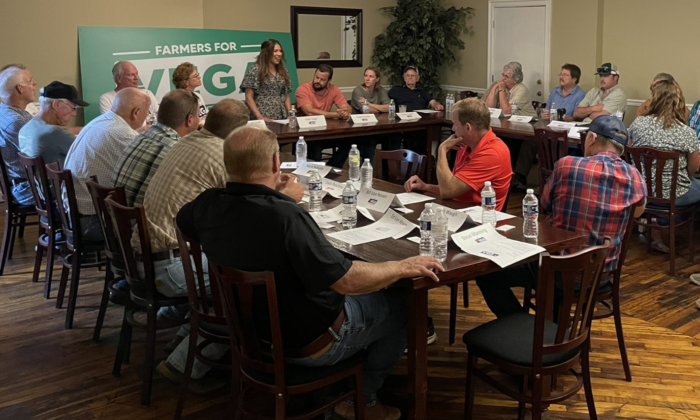 As polls close on Nov. 8 and election night results unscroll east to west, eyes countrywide will be watching two Virginia congressional district races that analysts say are bellwether contests presaging which party will win the day and control the U.S. House in 2023.

According to Cook Partisan Voting Index (CPVI), Virginia’s 2nd and 7th Congressional Districts are among 22 nationwide occupied by incumbent Democrats in fall races that are rated as “tossups.”

The Republican Party has targeted the two commonwealth districts—and its underdog candidate is making a competitive run in a third district—in its goal to flip the Virginia congressional delegation’s 7–4 Democratic majority into, at least, a 6–5 Republican advantage.

Doing so would also notch two of the five seats that Republicans must gain on Nov. 8 to secure a midterm majority in the U.S. House. That’s why eyes will be watching as results in Virginia’s 2nd and 7th Congressional Districts unfold.

All 11 Virginia congressional incumbents are defending their seats in November. Eight of the sitting reps, including all four Republican House members, are expected to convincingly win additional two-year terms in the fall.

However, three Democrats, all two-term incumbents, face stiff challenges in bids to retain their seats in Congress.

In the 7th Congressional District, also regarded as a purple up-for-grabs swing district with a “vulnerable” Democratic incumbent, both candidates are also women who share similar career experiences, with Spanberger and Republican challenger Yesli Vega both highlighting law enforcement backgrounds in their campaigns.

CPVI rates the district as “a toss-up.” FiveThirtyEight gauges it as “highly competitive” with a nominal plus two Democrat “lean.” Sabato’s Crystal Ball and Inside Elections give Spanberger a slight edge.

Polls appear to confirm projections of a nip-and-tuck race with an early August RMG Research survey of likely voters showing Spanberger polling 2 percentage points higher than Vega among respondents, a difference “barely out of the margins” of negligibility.

Elected Prince William County Board supervisor in 2020, Vega is the Texas-born daughter of Salvadoran immigrants and was motivated as a teenager to become a law enforcement officer after her brother was shot by MS-13 gang members.

Vega has served as an officer with the Alexandria and Manassas Park police departments and as a deputy with the Prince William County Sheriff’s Office, where she remains an auxiliary deputy.

Spanberger, who wasn’t tested in a primary, also touts law enforcement credentials. The daughter of a federal law enforcement officer, she worked for more than four years as a U.S. Postal Inspection Service agent, specializing in money laundering and narcotics cases before serving eight years with the CIA as an operations officer.

With both candidates prominently featuring their support for law enforcement, their campaigns are citing their opponent’s deficiencies in dedication to the cause in nearly $9 million of recent ad buys, including $4.7 million by Spanberger’s campaign, according to Federal Communications Commission filings compiled by the Virginia Public Access Project.

A digital ad released in late August claims that Vega “voted against our police and sheriffs” when she voted against annual budgets in consecutive years as a Prince William County Board supervisor.

Spanberger has also been pounding away at Vega for saying Jan. 6, 2021, Capitol breach defendants are being unfairly persecuted and discrediting the FBI’s search of former President Donald Trump’s Mar-A-Lago resort home, citing campaign fundraising emails where Vega says the “corrupt” search was “for no reason” and claims that the FBI is part of the “deep state.”

“I carried a gun every single day for a couple years,” Spanberger said in a statement. “I have written my fair share of search warrant, arrest warrant affidavits. I have a set of experiences as well. That’s why I find [Vega’s] position on commitment to law enforcement so frankly offensive.”

Vega doesn’t support “defunding the FBI,” but if elected, she said she would call for an audit of the agency.

Noting that she was a vocal opponent of the party’s “defund the police” contingent, Spanberger’s campaign literature emphasizes that she’s a co-sponsor of a measure within the proposed Invest to Protect Act to boost federal grant funding for local police departments to hire and train more officers, which is popular with area police agencies.

Vega dismissed Spanberger’s attempts to discredit her law enforcement credentials as “election-season Abby” reaching for “laughable” straws, noting that the incumbent voted for the “George Floyd Justice in Policing Act,” which makes it easier to sue law enforcement.

Vega said she voted against overall Prince William County budgets—while pushing to hire more police officers—because the spending plans included tax increases that she opposed during the COVID-19 pandemic and then during inflationary price increases that she blames on the Biden administration and Democrats such as Spanberger.

A former hostage negotiator who appears in her auxiliary deputy uniform in campaign messages pledging to fight crime and illegal immigration at the U.S.–Mexico border, Vega held an Aug. 15 law-enforcement roundtable that discussed police officer staffing shortages and garnered her endorsements from more than half the district’s law enforcement agencies.

“Republicans, Democrats, and independents all want to be safe in their own neighborhoods,” Vega said in a campaign statement.

“As your representative, I will never succumb to the defunding of, or the new term ‘reimagining of’ police and law enforcement. Whether it’s the cop on the street or the agent preventing fentanyl from crossing our southern border, I will always support, fund, and stand with the brave men and women of law enforcement who keep us safe.”