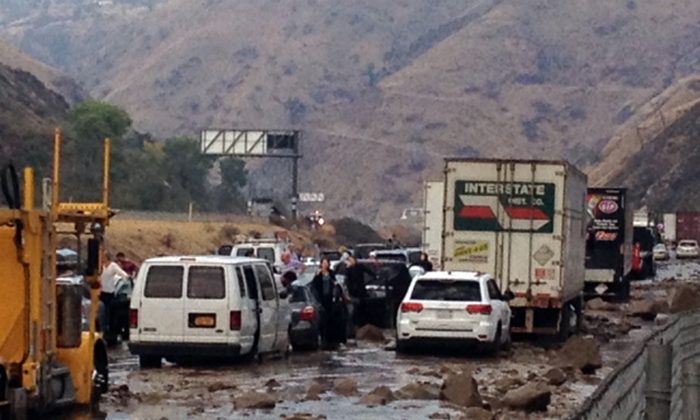 In this photo provided by Caltrans, vehicles are stopped in mud on California's Interstate-5 after flooding Thursday, Oct. 15, 2015. (Caltrans via AP)
US

LOS ANGELES—Emergency crews shoveled mud from a section of Interstate 5 north of Los Angeles after flash flood debris blocked the important roadway, stranded hundreds of vehicles, and forced some motorists to take refuge on top of their cars.

Excavator trucks scooped and hauled away mud in the darkness Thursday night with the cleanup expected to continue well into Friday, leaving thousands of drivers searching for alternative routes.

About 15 cars remained wedged in the debris and needed to be towed out.

There were no reports of deaths or injuries from the flooding Thursday at Fort Tejon, about 75 miles north of downtown Los Angeles, brought on by a storm system that produced heavy rainfall across the region.

A second highway was closed Thursday night following a separate mudslide. And a number of secondary roads were left impassable from mud and some residents were trapped in their homes.

After removing the debris, a geologist will check the stability of nearby slopes before the freeway is reopened, California Department of Transportation spokeswoman Lauren Wonder said earlier.

“There could always be more slide that comes down onto the road,” she said. “Our engineers are always very careful so they make sure in a flood situation, any hillside is secure. That’s always precautionary.”

Photos of Interstate 5 posted on social media showed the freeway in disarray, with semi-trucks and cars sitting askew, stuck in mud that in some cases surpassed their wheels. Not an inch of asphalt was visible.

One of the worst-hit areas was Lake Hughes, a mountainside community in northern Los Angeles County. Robert Rocha, a 37-year-old resident, said he was driving home from work when the storm arrived.

“It was getting pretty hairy out there,” he said. “I’ve never seen it rain that hard in such a short period of time, the hail and wind — it was coming down hard,” he said. “The debris was just intense — chunks of wood and rock flowing everywhere.”

Los Angeles County Fire Department Capt. Keith Mora said the agency rescued four people and two dogs from atop one car. Many more were able to walk to safety after waiting out the flood on top of their own vehicles, he said.

“They were able to use their vehicles as a security blanket, to stand on top of and stay higher than the flood water,” Mora said.

In all, the agency reported rescuing 14 people and eight animals. Los Angeles County firefighters were expecting to go house to house Friday morning to check on any stranded occupants.

The storm was instigated by a low pressure system absorbing moisture from the south and sparked severe weather and flash flood warnings across southwestern California. As much as 1.45 inches of rain fell in a quick span of time near where the most intense flooding occurred.

On Interstate 5, up to 5 feet of mud covered the northbound lanes. Thousands of cars and trucks were backed up for miles on the inland route that runs the length of California.

State Route 58 in Kern County was closed near Mojave, Calif., about 95 miles north of downtown Los Angeles. In a statement, the California Department of Transportation said it expected the State Route 58 shutdown would be “a long term closure” and advised motorists to seek alternative routes.

Back in Lake Hughes, Jennifer Stewart said she had just picked up her 17-year-old daughter from school when the storm hit.

“The hail was so bad I thought it was going to crack my windshield,” she said.

Stewart said she was among about 30 motorists who were left stranded on a local road. Everyone was calm, she said.

“It’s kind of like a tailgate party without the party,” she said. “Everyone’s just quietly sitting in their cars talking among themselves.”