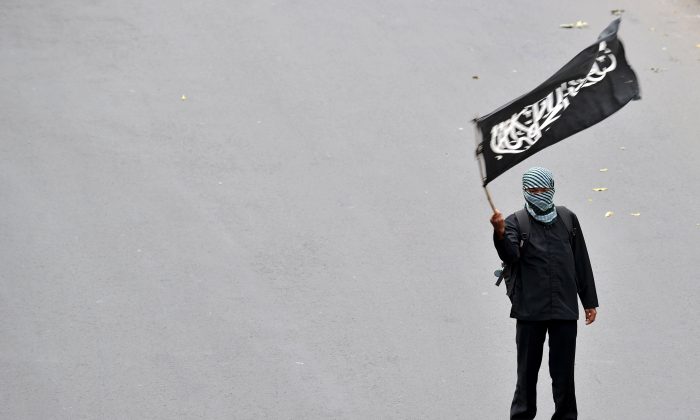 A Muslim supporter of the Indonesian section of the pan-Islamic organization Hizbut Tahrir holds a flag in the road during a protest against this week's visit by President Barack Obama at the U.S. embassy in Jakarta on Nov. 7, 2010. (Adek Berry/AFP/Getty Images)
Asia & Pacific

The hostage crisis at a restaurant in Bangladesh’s capital that left 28 dead, including 20 hostages and six militants, has focused attention on the radical Islamist attacks occurring in the moderate, mostly Muslim country in the past few years. Most have been claimed by the Islamic State (ISIS) or by al-Qaida’s local branch, but the government vehemently denies these transnational jihadi groups have any presence in the country.

Instead, the government blames domestic militants and its political opponents of trying to destabilize the country. Authorities have cracked down on extremist groups by banning them from operating and arresting many of their members. The opposition parties deny the allegation that they’re involved.

A look at some of the main Islamic political parties and radical groups in the country:

Bangladesh’s largest Islamist political party advocates the introduction of Shariah, or Islamic law, in the country. It is a partner of the main opposition Bangladesh Nationalist Party, which is led by former Prime Minister Khaleda Zia, the archrival of current Prime Minister Sheikh Hasina.

Hasina has accused the Bangladesh Nationalist Party and Jamaat-e-islami of orchestrating violent attacks to create chaos, an allegation the opposition denies.

Jamaat-e-Islami’s leaders opposed Bangladesh’s 1971 war to gain independence from Pakistan. Its members formed groups and militias to aid Pakistani soldiers during the war and acted as an auxiliary force involved in kidnappings and killings of those who supported independence. Many of its top leaders fled the country after independence, but returned following the 1975 assassination of independence leader Sheikh Mujibur Rahman.

Jamaat-e-Islami was banned for a brief period after the 1971 war, but was revived in 1979 after a military dictatorship took power. The group grew stronger and became a serious political force by the early 2000s. Zia’s late husband and then-President Ziaur Rahman allowed Jamaat-e-Islami to restart as a political party in independent Bangladesh.

Many of its top leaders have been accused of war crimes, and some have been executed after special tribunal proceedings that were widely criticized as flawed.

Bangladesh’s High Court canceled the party’s registration in 2013, effectively barring it from contesting elections. The party has appealed the decision.

The Bangladeshi affiliate of al-Qaida on the Indian subcontinent, or AQIS, is now banned in Bangladesh. The group, also operating under the names Ansar al-Islam and Ansar Bangla 7, claimed responsibility for the killings of four secular bloggers last year, as well as the killing earlier this year of two men including a gay rights activist who worked for the U.S. Agency for International Development.

Ansarullah came to light as an active Islamist group in 2013, when secular blogger Ahmed Rajib Haider was killed in front of his home in Dhaka. The seven suspects indicted and awaiting trial include the university students and the group’s alleged chief, Jasimuddin Rahmani, a former imam. The other suspects said Rahmani’s sermons inspired them to attack Haider.

Bangladesh intelligence officials have said they tracked down the group after investigating a blog called “Ansarullah Bangla Team,” which had five administrators, including two in Pakistan. In 2014, detectives arrested a Bangladeshi man and said he was one of the administrators. Despite the arrests of at least 40 suspected group members, the blog remains active with other administrators who operate from abroad, according to Bangladeshi intelligence.

On Sunday, the Bangladeshi government identified the men who carried out the deadly hostage taking in a restaurant in Dhaka’s diplomatic quarter as being from Jumatul Mujahedeen Bangladesh. The group was founded in 1998 by Shaikh Abdur Rahman, a religious teacher educated in Saudi Arabia.

It came to notice in 2001 when it engaged in conflict with an extremist communist group in Dinajpur in northern Bangladesh. On Aug. 17, 2005, it exploded about 500 homemade bombs at nearly 300 locations almost simultaneously across the country as part of a campaign demanding the introduction of Shariah law.

Later it continued its violent campaign by attacking and killing judges and police, and threatening journalists and women without veils.

It created a large network of supporters; some government officials say it has as many as 10,000 members.

In 2005, six of its leaders including Rahman were arrested and the group was banned. The six were hanged in 2007 after being convicted of the killings of two judges.

However, it remains active and has attempted to regroup. Dabiq, a magazine of the Islamic State, has claimed Rahman was the founder of the jihadi movement in Bangladesh.

The group was banned in October 2009 after intelligence reports suggested it was recruiting students from expensive schools and universities and radicalizing them. Authorities at the time said the group posed a security threat, though it was not implicated directly in any terrorist act.

The group is thought to be affiliated with global network of radical outfits, as well as other banned domestic militant outfits including Jumatul Mujahedeen Bangladesh. It came into being in Bangladesh in 2000, and it sought out youths from well-off families.

The head of Hizbut Tahrir in Bangladesh, Mohiuddin Ahmed, a former teacher at state-run Dhaka University, was arrested in 2010 and is now in jail. Some other top organizers have also been arrested.

Officials say the group has been weakened but it is trying to re-emerge.