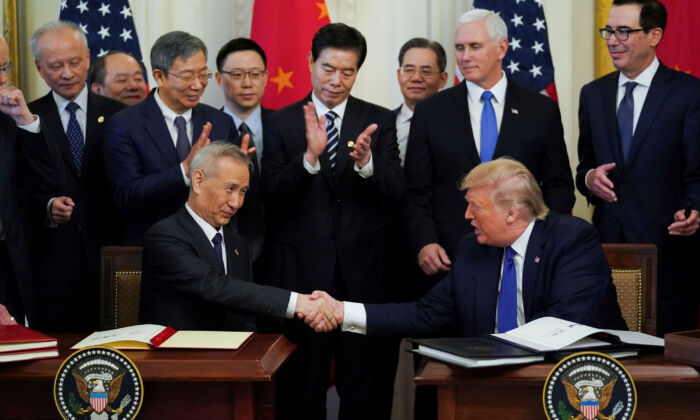 Chinese Vice Premier Liu He and U.S. President Donald Trump shake hands after signing "phase one" of the U.S.-China trade agreement during a ceremony in the East Room of the White House in Washington, Jan. 15, 2020. (Reuters/Kevin Lamarque)
By Cathy He

The United States and the Chinese regime on Jan. 15 signed a “phase-one” trade deal, cooling tensions between the world’s two largest economies in an 18-month trade war.

Prior to the deal, the United States agreed to cut tariffs to 7.5 percent from 15 percent on about $120 billion of China-made consumer goods, including flat panel televisions, Bluetooth headphones, and footwear. It also scrapped planned tariffs on roughly $156 billion of consumer products, including cell phones, toys, and laptops.

Duties of 25 percent remain on about $250 billion of China-made industrial goods and components used by U.S. manufacturers.

President Donald Trump said on Jan. 15 that he would remove all tariffs if the “phase two” negotiations are successful.

Here’s a look at key commitments from the 90-page agreement.

The Chinese regime committed to buy an additional $200 billion of U.S. goods and services over the next two years, over a baseline of $186 billion in purchases in 2017.  This includes purchases of manufactured goods, such as aircraft, pharmaceuticals, and industrial machinery, which will increase by $77.7 billion over the two-year period.

U.S. services, including cloud-computing and financial services, are set to grow by $37.9 billion, while purchases of energy products, such as crude oil and liquefied natural gas, will also rise by $52.4 billion.

Beijing agreed to purchase an additional $32 billion of farm goods over the next two years, including soybeans, cotton, grains, and meat. It also pledged to strive to buy an additional $5 billion of agricultural products annually. In addition, the regime agreed to allow more market access to U.S. meat, poultry, dairy, pet food, and agriculture biotechnology.

The deal includes measures aimed at preventing and punishing the theft of trade secrets.

It makes it easier for aggrieved U.S. firms to request authorities to initiate criminal investigations in China, and for them to prove their case in civil proceedings. The regime also agreed to establish enforcement procedures for rights holders in cases of online infringement.

Beijing agreed to end its longstanding practice of forcing U.S. companies to transfer technology to domestic business partners as a condition of market access. Any transfers or licensing of technology must be “based on market terms that are voluntary and reflect mutual agreement.”

The regime committed to refrain from devaluing its currency or making large-scale interventions in its currency market. It also agreed to regular disclosures of data on its foreign exchange reserves.

The deal creates a dispute resolution system that prescribes time frames for actions at various stages: starting from the working level, escalating all the way up to the USTR and Vice Premier level of both countries.

It is designed to be a 75-day period from the start of the appeal until resolution of the dispute, according to a senior administration official. If there’s no resolution within that time frame, then there will be an opportunity for expedited consultations on the remedy for an additional 15 days. If parties fail to reach a resolution they have the choice to quit the agreement, the official said.