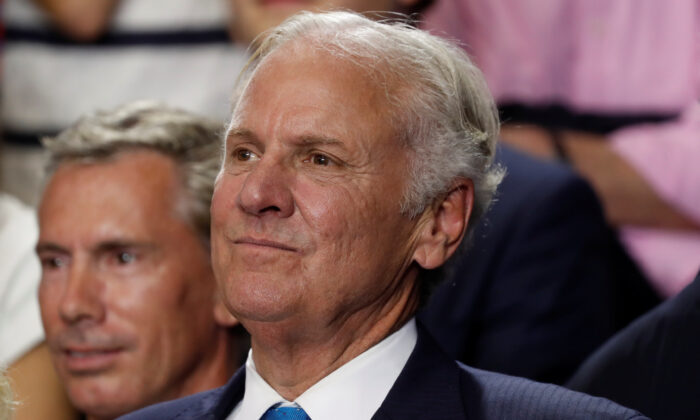 The next round of midterm primaries is set for June 14, when voters in Maine, Nevada, North Dakota, and South Carolina will cast their ballots.

In Texas, a special general election will take place to fill the state’s 34th Congressional District seat in the U.S. House.

The special election is being held to fill a vacancy left by Democrat Filemon Vela, who stepped down in March to work for a lobbying firm.

Outcomes in the primaries could prove pivotal in whether the Republicans will regain control of the House and the Senate, or if Democrats cling to their majority.

Gubernatorial races play a role in whether a state remains red or blue, shifts to the other side, and draws closer to a purple state.

Northern Maine is considered Trump territory, and Democrat U.S. Rep. Jared Golden is seeking reelection in the state’s 2nd Congressional District. He is the lone Democrat remaining in Congress who voted against impeaching Trump and will likely face Republican Bruce Poliquin in the November general election. Golden defeated Poliquin in 2018.

Poliquin is a former U.S. Rep. in the 2nd Congressional District and he is opposed by Liz Caruso in the Republican primary.

Paul R. LePage, a Republican who served two terms as Maine’s governor from 2011 to 2019, is seeking another stint in the state’s top office. He is running against Democrat Gov. Janet Mills. They are unopposed in the primary.

Brown did win a straw poll taken by the Nevada Republican Party and his campaign is fueled by an energized grassroots base.

At a debate in early May, Laxalt said, “President Trump looked into a camera and said the only person that he can trust in this state is me, and that’s because I have stood consistently and concretely for our conservative values.”

Democrat Gov. Steve Sisolak is running against former Clark County Commissioner and Nevada State Assemblyman Tom Collins in the primary and is expected to win. If so, he will face one of 15 candidates seeking the Republican nomination. Yes, 15.

Trump has endorsed former Clark County Sheriff Joe Lombardo, but he is challenged by Dean Heller, a former U.S. Senator from 2011 to 2019 who also served in the U.S. House and the Nevada State Assembly along with a stint as Nevada’s secretary of state.

Vilela was defeated in her bid for a U.S. House seat in 2016 and was included in a Netflix documentary with progressives Alexandria Ocasio-Cortez (D-N.Y.) and Cori Bush (D-Mo.), who won their respective elections to the House.

The Republican primary includes real estate agent and business owner Annie Black, who was elected to the Nevada State Assembly in 2020 and was endorsed by House Republican Conference Chair Elise Stefanik (R-N.Y.).

Incumbent Republican Senator John Hoeven is endorsed by Trump and expected to easily win another term.

Tim Scott is the Senate’s only black Republican, and he is unopposed in the June 14 primary.

On June 10, Democratic gubernatorial candidates Joe Cunningham, a former U.S. Representative, and state Sen. Mia McLeod will meet for their lone debate before the June 14 primary.

South Carolina’s incumbent Republican governor, Henry McMaster, is endorsed by former president Donald Trump and is expected to prevail on June 14 against Harrison Musselwhite, who is chairman Greenville County Republican Party legislative committee and a truck driver whose nickname is “Trucker Bob.”

Carlton Boyd, Calvin McMillian, and William Williams are also seeking the Democratic gubernatorial nomination, but Cunningham and McLeod are the clear frontrunners.

McLeod is the first black woman to run for South Carolina’s top office. Cunningham was defeated in his U.S. House re-election bid in 2020.

The winner will face a difficult challenge in the general election. A Democrat has not been elected governor in the state since 1998, and no Democrat has prevailed in a statewide race since 2006.

In 2020, Cunningham lost to Republican Nancy Mace, who is facing a competitive primary to keep her seat.

Rice was one of 147 Republicans in the House and Senate who voted against certifying Joe Biden’s 2020 election victory. In 2021, he told Politico, “In retrospect, I should have voted to certify. Because President Trump was responsible for the attack on the Capitol.”

Rice was also one of 10 Republican House members who voted to impeach Trump.

In an interview that aired on NBC News’ “This Week” on June 5, Rice said that the decision was “a conservative vote” and “I did it then. And I would do it again tomorrow.”

Trump has backed state Rep. Russell Fry in a field that includes Rice, Fry, and five other candidates. If the winning candidate does not surpass 50 percent of the vote, there will be a runoff later in June. The Republican primary winner will face Democrat Daryl Scott in the general election.

Mace voted to certify the 2020 election results but did not vote to impeach Trump. She also decided to support holding Steve Bannon in contempt of Congress because he did not comply with a subpoena from the Jan. 6 committee.

Trump endorsed challenger Katie Arrington, a former Defense Department cybersecurity expert. In 2018, she upset U.S. Rep Mark Sanford in the Republican primary before losing to Cunningham in the general election.

Both races are expected to be close.

June 14 is the date for the emergency special election to fill Vela’s vacated U.S. House seat.

With help from national Republicans, Mayra Flores and her campaign have poured around $1 million into television ads. According to a campaign finance report, she has topped her closest Democratic competitor, Dan Sanchez, 16-to-1 in fundraising.

An attorney, Sanchez described this as a David vs. Goliath race, and he is David.

The special election winter will finish Vela’s term, which ends in January.

Vela had already said he would not run for another term before he resigned to take a job with lobby group Akin Gump.

Flores captured the Republican primary to contend for the open seat in November. U.S. Rep. Vicente Gonzalez is the Democratic nominee who will oppose Flores to earn a full term.