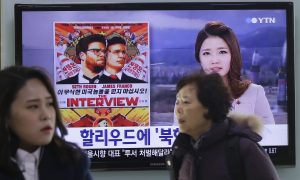 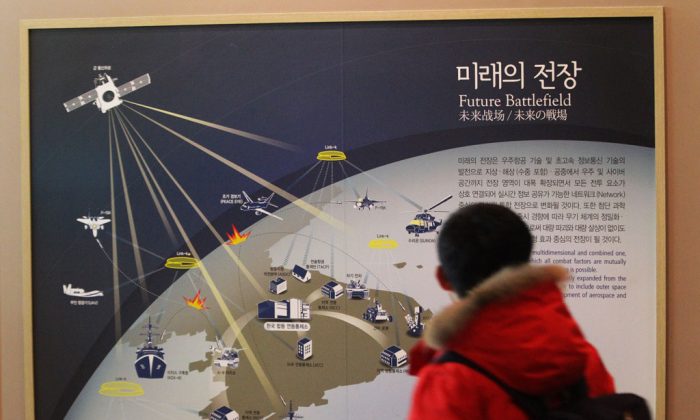 A South Korean student looks at a picture, which shows how the cyber warfare is going to be waged in the future in the Korean Peninsula if Korean War takes place, at Korea War Memorial Museum in Seoul, South Korea, Tuesday, Dec. 23, 2014. An hours-long Internet outage in one of the world’s least-wired countries was probably more inconvenient to foreigners than to North Korean residents, most of whom have never gone online. South Koreans, who are banned by national security law from accessing North Korean websites, the outage made little difference in their lives. (AP Photo/Ahn Young-joon)
Asia & Pacific

It wasn’t immediately clear what caused the Internet stoppage in one of the least-wired and poorest countries in the world, but outside experts said it could be anything from a cyberattack to a simple power failure. The White House and the State Department declined to say whether the U.S. government was responsible.

Even if a cyberattack had caused the shutdown, analysts said, it would largely be symbolic since only a tiny number of North Koreans are allowed on the Internet — a fraction of Pyongyang’s staunchly loyal elite, as well as foreigners.

Though it denies responsibility for the Sony hack, North Korea’s government has called it a “righteous deed” and made clear its fury over Sony’s film “The Interview,” a comedy that depicts the assassination of the North’s authoritarian leader, Kim Jong Un, the head of a 1.2 million-man army and the focus of an intense cult of personality.

South Korean officials, speaking on condition of anonymity because of office rules, said the North’s official Korean Central News Agency and the Rodong Sinmun newspaper, which are the main channels for official North Korean news, had both gone down. But the websites were back up later Tuesday. Among the posts glorifying the ruling Kim family included one about Kim Jong Un visiting a catfish farm.

U.S. computer experts described Monday’s Internet outage in the North as sweeping and progressively worse. Jim Cowie, chief scientist at Dyn Research, an Internet performance company, said in an online post that the North came back online after a 9 ½-hour outage. But the company said the North later suffered two outages, one lasting half an hour.

Possible causes for the shutdown include an external attack on its fragile network or even just power problems, Cowie wrote. But, he added, “We can only guess.”

The outage was probably more inconvenient to foreigners, who can access the Internet through 3G networks, than to North Korean residents, most of whom have never gone online. There are only about 1,000 Internet Protocol addresses in North Korea for a population of 25 million, South Korean analysts say. The privileged are also allowed to view a self-contained domestic Intranet that carries state media propaganda and a limited amount of information pulled and censored from the real Internet.

North Korea didn’t immediately release a response to the shutdown. But a commentary carried in state media Tuesday was filled with characteristic rhetoric, criticizing what it called a failed U.S. policy on Pyongyang and comparing the United States to the Roman Empire, which, it said, “was thrown into a dumping ground of history as it collapsed while seeking prosperity through aggression and war.”

Last year, North Korea suffered similar brief Internet shutdowns of websites at a time of nuclear tensions with the U.S., South Korea and other countries. North Korea blamed Seoul and Washington for the outages.

President Barack Obama has said the U.S. government expects to respond to the Sony hack, which he described as an expensive act of “cyber vandalism” by North Korea.

Obama did not discuss details, and it was not immediately clear whether the Internet connectivity problems represented the retribution. The U.S. government regards its offensive cyber operations as highly classified.

U.S. options for acting against North Korea are limited. Although some analysts believe there are more severe financial measures that can be taken by Washington, the country already faces massive international and U.S. sanctions over its repeated nuclear and rocket tests.

The hack has been a nightmare for Sony, which canceled plans to release “The Interview” after a group of hackers made threats against theaters that planned to show it.

North Korea has promoted the development of science and technology as a means of improving its moribund economy.

More than a million people use mobile phones in North Korea. The network covers most major cities, but users cannot call outside the country or receive calls from outside. The North’s Intranet gives access to government-sanctioned sites and works with its own browsers, search engine and email programs, according to South Korea’s Unification Ministry.