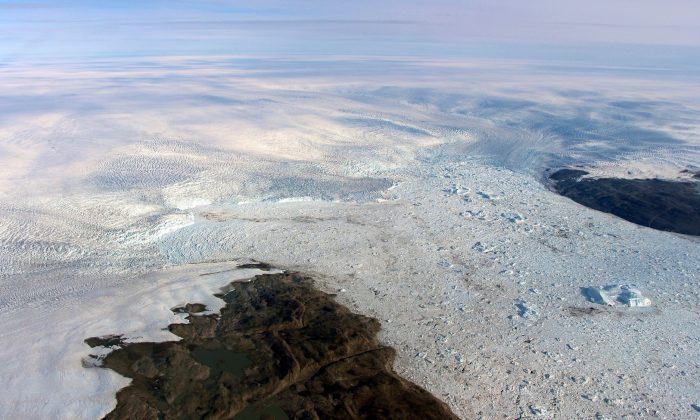 Patches of bare land at the Jakobshavn glacier in Greenland, in 2016. (NASA via AP)
Environment

WASHINGTON—A major Greenland glacier that was one of the fastest shrinking ice and snow masses on Earth is growing again, a new NASA study finds.

The Jakobshavn glacier around 2012 was retreating about 1.8 miles (3 kilometers) and thinning nearly 130 feet (almost 40 meters) annually. But it started growing again at about the same rate in the past two years, according to a study in Monday’s Nature Geoscience.

“That was kind of a surprise,” said Geological Survey of Denmark and Greenland ice and climate scientist Jason Box.

Box, who wasn’t part of the study, said Jakobshavn is “arguably the most important Greenland glacier because it discharges the most ice in the northern hemisphere. For all of Greenland, it is king.”

A natural cyclical cooling of North Atlantic waters likely caused the glacier to reverse course, said study lead author Ala Khazendar, a NASA glaciologist on the Oceans Melting Greenland (OMG) project. Khazendar and colleagues say this coincides with a flip of the North Atlantic Oscillation—a natural and temporary cooling and warming of parts of the ocean that is like a distant cousin to El Nino in the Pacific.

The water in Disko Bay, where Jakobshavn hits the ocean, is about 3.6 degrees cooler (2 degrees Celsius) than a few years ago, study authors said.

When the global warming movement started gaining momentum in the early 1990s, proponents began insisting that climate change science is irrevocably settled and the issue is not up for debate. It’s irrefutable, they said, that human-caused climate change is real, and carbon dioxide and other greenhouse gases resulting from the use of fossil fuels are an urgent threat and must be stopped.

That’s still the refrain today but this rigid stance doesn’t sit well with the numerous scientists who don’t agree and who worry about the billions being spent to prevent a tiny amount of anticipated warming—efforts that may, in the end, bring about little if any change.

These so-called skeptics say the climate has historically had warm periods and cool periods and will continue to do so—that’s simply how the climate cycles—and that man-made CO2 is not a pollutant, nor is it on track to cause apocalyptic climate change, as the global warming movement maintains.

“In general, science is never settled, it’s always an ongoing organic process. But they’re trying to abuse the authority of science in order to pursue policy objectives that, for one reason or another, they think are important,” says climatologist and author Patrick Michaels, the director of the Center for Study of Science at the Cato Institute in Washington, D.C.

“There has really been no recent convincing evidence that what we would call the view of cataclysmic global warming has any support. I mean, the Earth’s surface temperature continues to warm at a very modest rate. It didn’t warm at all, depending on whose record you look at, from the late 1990s to about 2014—and the only way that a warming was deduced from that record was to change the data, not the observation.”

As for anthropogenic global warming (AGW), Michaels says it’s possible for humans to exert subtle changes on the climate, but there are other factors as well.

Back in 1997, Michaels was one of the 31,500 concerned U.S. scientists, including 9,000 with PhDs, who signed their names to a petition rejecting the Kyoto Protocol, the first international climate change treaty.

The preamble states that the limits on greenhouse gases (GHGs) proposed by the Kyoto agreement “would harm the environment, hinder the advance of science, and damage the health and welfare of mankind” and notes that there’s no scientific evidence that GHGs are causing catastrophic heating of Earth’s atmosphere.

“Moreover, there is substantial scientific evidence that increases in atmospheric carbon dioxide produce many beneficial effects upon the natural plant and animal environments of the Earth,” it reads.

A posting on the Right Climate Stuff, a website founded by former NASA scientists and engineers, says CO2 “is a naturally occurring substance required to sustain human, animal, and plant life, and for which there is no substitute” and says it is “scientifically embarrassing” that the U.S. Environmental Protection Agency  (EPA) has declared it a pollutant that must be regulated.

Michaels, also a past president of the American Association of State Climatologists, is a former contributing author and reviewer on the Intergovernmental Panel on Climate Change, the United Nations body that leads the charge in the push to halt warming.

The IPCC claims that, according to its computer models, the world has already warmed by 1 degree Celsius and is projected to reach 1.5 degree Celsius by 2040. If that happens, it would bring catastrophic results like rising sea levels, more powerful hurricanes, scorching temperatures, worsening droughts, heavy flooding, and melting glaciers.

To forestall such a scenario, the IPCC wants the world to move away from fossil fuels and reduce or even eliminate CO2.

There is substantive disagreement in the broader scientific community about this theory. Skeptics say such talk is alarmist, not based on sound science, and amounts to eco-hysteria and scare-mongering.

“I believe that the global warming establishment is a political, social organization, not a scientific one, so I don’t think the science is settled and I don’t think they know what they’re talking about,” says Ian Clark, a professor in the Department of Earth Sciences at the University of Ottawa and director of the Ján Veizer Stable Isotope Laboratory, named in honour of Canada’s leading geoscientist Ján Veizer.

Numerous dire predictions made over the years by the IPCC and others have failed to materialize. Among them is climate change guru Al Gore’s famous 2008 prediction that the Arctic would be ice-free within five years (by 2013).

The latest IPCC report, released in October, says if CO2 not drastically reduced by 2040, the world will suffer disastrous, irreversible consequences.

“My belief is that there is a very strong, a very large group of scientists who either don’t know or don’t believe in [the AGW] opinion,” says Clark, adding that it would be far better if the “billions upon billions upon billions” being spent on climate change were instead put toward some of the world’s most pressing environmental problems.

The Epoch Times reporter Joan Delaney and The Associated Press contributed to this report.