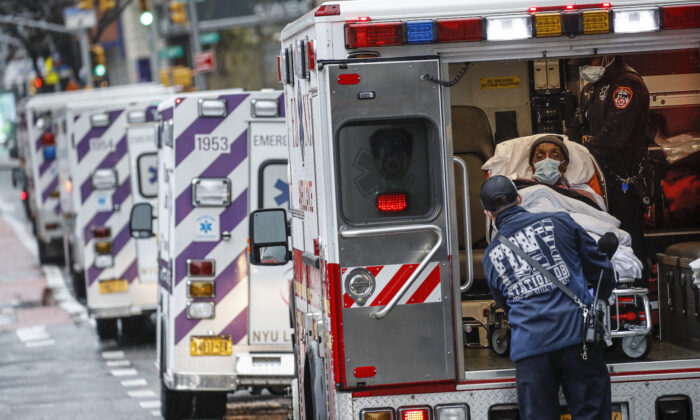 A patient arrives in an ambulance cared for by medical workers wearing personal protective equipment due to COVID-19 concerns outside NYU Langone Medical Center in New York on Apr. 13,2020.(John Minchillo/AP)
By Venus Upadhayaya

A COVID-19 forecasting model developed by the University of Washington’s Institute for Health Metrics and Evaluation (IHME) has projected significantly lower estimates of total deaths from the pandemic into early August, according to an April 17 update.

“We are seeing the numbers decline because some state and local governments, and, equally important, individuals around the country have stepped up to protect their families, their neighbors, and friends and coworkers by reducing physical contact,” IHME Director Christopher Murray said in a statement on April 17.

The latest projections by IHME also show that mortality in the United States due to the CCP (Chinese Communist Party) virus likely peaked on April 15, with 2,481 deaths.

The IHME’s projections are much lower than the figure of 2.2 million projected by the Imperial College London. That model had projected mortality for situations where no effort was being made to control the pandemic, members of the White House coronavirus task force explained on March 31.

During that briefing, the task force also referred to another model that projected only 100,000 to 240,000 deaths, given that strict social distancing measures had been imposed, according to National Public Radio.

The IHME said its new state-by-state U.S. analysis shows that some states may be able to relax aspects of social distancing as early as May 4 if “robust containment strategies” are implemented to curb a second wave of the pandemic.

States being tagged as looking fit for opening based on current data include Vermont, West Virginia, Montana, and Hawaii. States such as Iowa, North and South Dakota, Nebraska, Utah, Arkansas, and Oklahoma, will have to wait until late June or early July.

The IHME said that social distancing can be safely relaxed if the health care system is widely able to implement and sustain sufficient testing, contact tracing, and isolation of confirmed cases. Large gatherings are likely to remain restricted.

“Now, the challenge—as well as opportunity—is for states to figure out how to reopen the U.S. economy and allow people to get back to work without sacrificing that progress. Relaxing social distancing too soon carries great risks of a resurgence of new infections. No one wants to see this vicious cycle repeating itself,” Murray said.

He added that special attention should be paid to prevent the reintroduction of infection from other states and countries, and when IHME’s projections indicate a drop in infections to one per 1 million people, the health care system can shift from social distancing strategies to new strategies.

“Each state is different,” Murray said. “Each state has a different public health system, and different capabilities. This is not a ‘one decision fits all’ situation.”