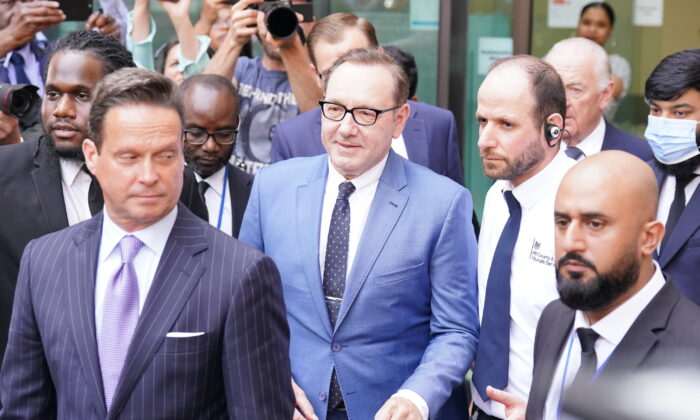 Spacey, 62, did not enter a formal plea to the charges but his lawyer Patrick Gibbs, QC, told Westminster Magistrates Court: “Mr. Spacey strenuously denies any and all criminality in this case. He needs to answer these charges if he is to proceed with his life.”

He is accused of four counts of sexual assault and one count of causing a person to engage in penetrative sexual activity without consent.

Spacey, who has won Oscars twice for “American Beauty” and “The Usual Suspects,” was told by magistrates he was free to return to the United States pending his trial.

Spacey, who was artistic director of The Old Vic theatre in London at the time of the alleged offences, was granted unconditional bail by deputy chief magistrate Tan Ikram and will next appear at Southwark Crown Court on July 14.

The charges against him are:

Spacey lives in the United States now and the court heard he needed to be there to audition for work, and also had a pet dog there.

Spacey made no comment to the journalists and photographers waiting outside court and, once inside, gave his UK address as a flat in the Waterloo area of London.

Prosecutor Natalie Dawson did not give any further details of the allegations, which were authorised by the Crown Prosecution Service last month.

The judge told Spacey, “You have cooperated I am told with the authorities in New York and you have voluntarily attended these proceedings here today.”

After he was charged last month Spacey released a statement to “Good Morning America” in which he said, “While I am disappointed with their decision to move forward, I will voluntarily appear in the UK as soon as can be arranged and defend myself against these charges, which I am confident will prove my innocence.”