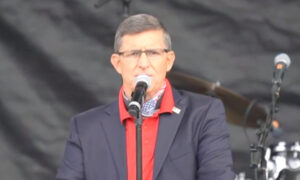 Flynn Speaks at Rally: 'We Cannot Accept What We Are Going Through as Right'
0
Share Now
TelegramFacebookTweetEmailTellMeWeReddit
Copy Link
What Voters Say

Kevin Jessip, the president of the Global Strategic Alliance, said he doesn’t think Democratic presidential Joe Biden will be the next president.

Jessip made the remarks while attending the Jericho March in the District of Columbia on Dec. 12.

He said the counterculture movement in the United State is going against God’s will and has to be undone.

“We see not only are they trying to continue the abortion, slaughter of our young people, but they’re trying to get us to join it and pay for it. That’s not going to happen. And they’re trying to remove the Ten Commandments. We’ve already removed prayer out of school, we removed Bible reading out of school, we changed the definition of marriage between a man and a woman. This is God’s greatest institution,” he said. “We’re going to restore all of that. We’re going to overturn Roe vs. Wade, we’re turning this nation back to the way, the will and the word of God, which is our foundation.”