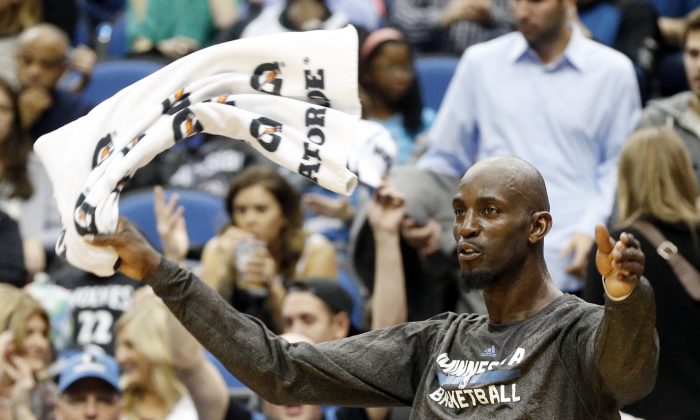 Minnesota Timberwolves Kevin Garnett encourages the sold-out crowd in the second half of an NBA basketball game against the Washington Wizards, Wednesday, Feb. 25, 2015, in Minneapolis. The Timberwolves won 97-77. It was Garnett's first game back with the Timberwolves after he waived his no-trade clause with the Brooklyn Nets to return to Minnesota where he played 12 years. (AP Photo/Jim Mone)
NBA

The Minnesota Timberwolves played a tribute video to Kevin Garnett on Wednesday night, in his first game since being re-acquired via trade from the Brooklyn Nets just before the trade deadline.

The video, which ran several minutes, showed a compilation of highlights from Garnett’s 12 years with the Timberwolves.

Approximately 19,856 fans packed into the Target Center for the game against the Washington Wizards, which the T-Wolves won handily. Fans started standing during warmups and kept it up throughout the game, which was tied at halftime before Minnesota blew it open.

Garnett was amped for his first game back in nearly eight years, with owner Glen Taylor pulling him aside in the locker and trying to calm him down. “Just enjoy it,” he told him, reported the Associated Press.

“I’ve been back before and I never paid attention to how much love is here still for me because I’m too busy being focused on the game,” Garnett said about his previous games at Target Center with Boston and Brooklyn.

“And tonight it was just over the top. I did not know the city missed me like this. I don’t think that you can ever wish or ever think the city loves you like this. But to see it is reality and I’m very appreciative.”

A slew of players who had off on Wednesday also tuned in to the crazy moment. “Sending chills through my body watching the #Twolves annonce KG to the home crowd during intros! #Crazy #NoPlaceLikeHome,” said LeBron James via Twitter.

“Tonight’s event was bigger than the game,” Wolves coach Flip Saunders said. “It’s about bringing a family member back home.”

Garnett started the game and played 19 minutes, scoring 5 points on 2-7 shooting, and 1-2 from the free throw line.

The power forward/center also had 8 rebounds, 2 assists, 2 blocks, and 1 steal.

Garnett was brought back to the Timberwolves to provide a veteran presence for their young core, including rookies Andrew Wiggins, Adreian Payne, and Zach LaVine.

Reports indicate that the organization wants to sign him to a new two-year deal after this season, while Garnett has expressed interest in eventually buying the team.