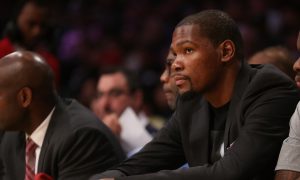 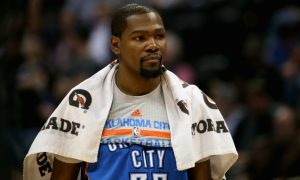 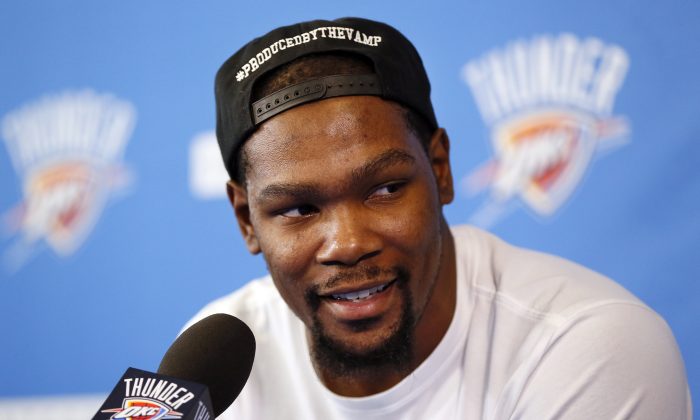 Kevin Durant had played his entire 9-year career with the Oklahoma City Thunder—which were the Seattle Supersonics when they drafted him second overall in 2007. (Nate Billings/The Oklahoman via AP)
High-profile cases

“Everyone be careful, take care of yourself and quarantine. We’re going to get through this,” Durant told The Athletic in confirming that he was diagnosed with COVID-19, the disease caused by the virus.

“The organization is currently notifying anyone who has had known contact with the players, including recent opponents, and is working closely with state and local health authorities on reporting,” the Nets said in a statement in confirming that four players tested positive. The team didn’t confirm their identities.

Durant said that he is feeling fine and is showing no symptoms.

Kevin Durant tested positive for coronavirus, Durant tells @TheAthleticNBA @Stadium. Durant says he is feeling fine: “Everyone be careful, take care of yourself and quarantine. We’re going to get through this.”

“All players and members of the Nets travel party are being asked to remain isolated, closely monitor their health and maintain constant communication with team medical staff,” according to the organization. “The health of our players and staff is of the highest priority to the organization and the team is doing everything within its power to ensure that those affected receive the best care possible.”

The three other Nets players were not disclosed. Several other NBA players on different teams have tested positive.

A statement from the Brooklyn Nets: pic.twitter.com/QnETcDEHCJ

Last week, the NBA suspended its season indefinitely to deal with the outbreak of the new virus, which emerged last year in mainland China.