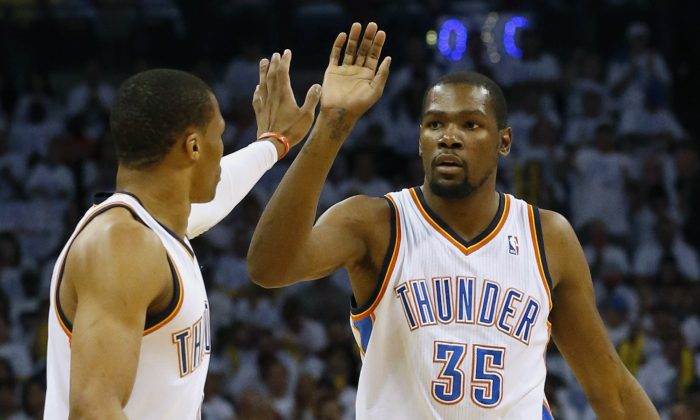 Kevin Durant to Washington, D.C. The idea has been gaining steam lately.

The subject was brought up at the Team USA basketball camp this week to both Durant and John Wall of the Washington Wizards.

“It’s not a bad (idea) at all,” Wall told USA Today about the idea of Durant eventually adopting LeBron James’ homecoming strategy.

“Two of the best guys in the East going head to head four times a year? It’d be pretty exciting. You just sit back and watch and see what happens, but (the Wizards’ Durant-motivated moves) definitely lets him know that we want him around.”

“To be with one of the top two best players in the league, in my opinion, who can score at will and do whatever he wants (would be great),” Wall said. “You could have a Big Three with me, him and Brad (Beal), and I feel like that’s what you need to win a championship now is a Big Three. It’d be great to have him back home.”

Durant told reporters that he thought James made a great decision to return to where he grew up.

“I thought it was well thought out. It was classy,” Durant said, per Yahoo. “Great move to do it through a letter. That was pretty cool. It’s fun to see a guy think about more than basketball for once than himself. I’m not saying LeBron is always thinking about himself, but he thought about the city where he comes from and Northeast Ohio and how he can affect so many kids.”

Durant says he’s constantly asked about what he’ll do in 2016, when he’s set to be an unrestricted free agent.

“I’m going to do what is best for me,” Durant said. “It’s hard to talk about that right now. I have two years left with Oklahoma City. I’m just focusing on that. I’m not going to make a decision based on what somebody else does.”

Durant did say that winning titles could keep him in Oklahoma City.

“Two years straight [winning titles], that would be cool,” he said. “It would definitely be tough to do anything. It’s one of those things where you’re building a dynasty now winning two in a row. “But I’m not focused on down the line. I’m focused on today. I love my teammates and my coaches. I love Oklahoma City.”