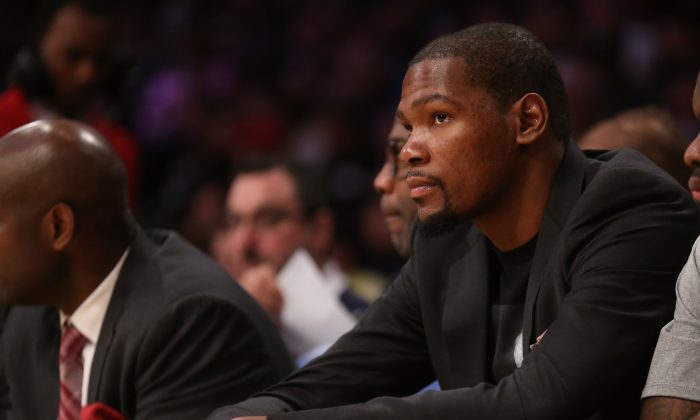 Kevin Durant will officially undergo bone graft foot surgery to try to correct his soreness and will be out for four to six months, the Thunder announced on Friday, prompting reactions from around the league.

The team had previously announced Durant would not return until the soreness went away but now say he’s officially out for the rest of the season, about 10 games before the playoffs start.

A number of players around the league took to Twitter to send well wishes to Durant, one of the most-liked players in the NBA.

That included CJ McCollum, who had similar foot problems several years ago.

Prayers up for @KDTrey5 & hopes for a speedy recovery..the game just isn’t the same with him out…#NBABrotherhood

Prayers out to my bro @easymoneysniper on a speedy recovery! Many people like to play this game, but he’s one of the few that LOVE to play and the league needs him!!

Darrnell Mayberry of The Oklahoman noted that none of the now-six surgeries for Durant and Russell Westbrook have been done by Thunder staff.

FYI: None of the 6 surgeries on Russell Westbrook’s rt knee or Kevin Durant’s rt foot will have been performed by the Thunder’s medical team

In fact, the doctors announced for the process– –were noted to have been part of the team that worked on Brook Lopez, the Nets player who has struggled with injuries the past several years.

NBA trainer Tim Grover made a note about “successful surgery.”

Durant’s foot issue is the reason I can’t stand hearing ‘successful surgery.’ Success is measured by what happens after surgery, not during.

ESPN noted how few games Durant had missed before this season.

Kevin Durant had missed 16 games in 7 NBA seasons entering this one. He’ll miss 55 this year. pic.twitter.com/8LkSVru4D5

It also noted that Oklahoma City has struggled without him, although Westbrook’s explosion after the All-Star break has helped keep them afloat.

The Elias Sports Bureau added that reigning MVP’s rarely miss this many games the following season.

Zach Lowe of Grantland said why most teams don’t opt for bone grafts.

Experts tell me bone graft is always safest route for healing, but most teams don’t do it off the bat b/c it takes a long time.

If you go with a surgery carrying a quicker recovery time, you need to take extreme caution in ramping up and get some good luck.

Durant’s last season under contract with the Thunder will now likely come with more pressure, as many now predict the Thunder will get sent home in the first round of the playoffs by the Warriors. The Wizards are among the teams that want to try to lure Durant to them.