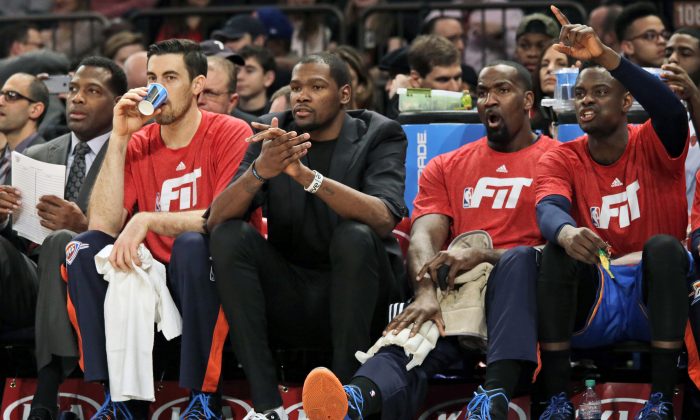 Kevin Durant is considering signing with the New York Knicks when he becomes an unrestricted free agent in the summer of 2016, according to a new report.

Durant is widely believed to be open to leaving the Oklahoma City Thunder, particularly if the team fails to snag a championship this season or the next.

The surprising new report claims that the Knicks are on Durant’s mind as a possible landing spot.

“No question about it,” a person close to Durant told the New York Daily News. “Kevin loves Carmelo (Anthony). It could work in New York. But never rule out the Thunder.”

The report is surprising because apart from a potential return, the Washington Wizards are considered by most to be the most likely landing spot for the star forward.

Washington has set itself up to land Durant in a series of moves to clear cap space for ’16, and also presents an attractive opportunity to play with rising stars John Wall and Bradley Beal.

Durant is from the D.C. area, and one of his former coaches was hired by the Wizards before this season.

Driving up the chances that Durant will leave is Oklahoma City’s current position in the standings. Due in part to Durant and Russell Westbrook missing dozens of games with injuries, the Thunder are 23-23 and 3.5 games out of the last playoff spot in the Western Conference.

The Thunder lost to the Knicks 100-92 without Durant on Wednesday night.


Fans had different reactions to the report claiming the Knicks are an option for Durant.

“Wonder how this effects the knicks free agent plans this summer,” said one Twitter user.

“Why would he head east to NYC…when he can go home to DC and make the Wizards an INSTANT title contender??? #CmonFrank,” said another.

“LOL you wish. I bet he’s going to dc though,” said yet another.