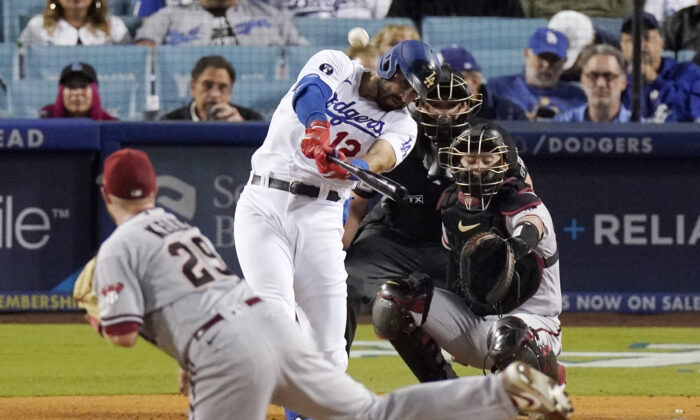 LOS ANGELES—Chris Taylor has struggled mightily this season, his feel at the plate varying day to day.

Even a three-run blast didn’t come easy in the Los Angeles Dodgers’ 5–2 win over the Arizona Diamondbacks on Monday night.

Taylor struck out 149 times in 365 at-bats coming into the game, with just 24 percent of his swings being put into play. He flied out in the second before connecting for his 10th homer off Merrill Kelly (12–7) in a four-run fourth. However, he had to wait for it.

Crew chief James Hoye ruled fan interference when a man in the lower left-field seats wearing a Dodgers jersey made a clumsy attempt at catching the ball in his glove. The ball struck the man in the belly and it ricocheted back onto the field.

The Dodgers challenged the call and after a video review, Taylor came trotting home with a three-run shot that extended their lead to 5–0.

“When I saw the replay, I thought it was a homer because it looked like it hit the guy in the chest so I think it would have hit the top of the wall and bounced over, but I wasn’t sure,” he said. “I thought it still might stand just the way replay has gone this year. You never know.”

On a night when the Dodgers’ power trio of Mookie Betts, Trea Turner, and Freddie Freeman went a combined 1 for 11 with a walk and two strikeouts, the lower half of the order produced.

Taylor had the biggest blow.

“It’s good to get a big hit there and come through with guys in scoring position,” he said. “Once you start hitting the ball hard, it kind of relaxes you a little bit.”

Clayton Kershaw struck out 10 six days after beating the D-backs 4–0 on the road.

“It’s not an easy thing to do,” he said of facing the same team in back-to-back starts. “You don’t want to overthink too much. There’s only so many things I can do. I don’t have too many tricks up my sleeve. Try to mix it up as best as I can.”

The Dodgers have beaten the D-backs in 19 of their last 20 meetings at Dodger Stadium. They improved to 12–3 against Arizona this season.

Kershaw (9–3) allowed one run and six hits in six innings to earn his second straight win after a loss and four no-decisions dating to July 24. His strikeouts tied for his second-most of the season. The left-hander struck out the side in the third.

Closer Craig Kimbrel pitched the ninth and gave up a leadoff single and then hit two straight batters to load the bases. Gavin Lux made a diving stab on pinch-hitter Sergio Alcantara, who grounded into a double play, before Daulton Varsho popped up to end it.

Lux had three hits from the No. 7 spot.

Joey Gallo drove in the Dodgers’ first two runs. He hit a 437-foot homer to the right-field pavilion with two outs in the second. Gallo had an RBI single in the fourth in which Max Muncy scored on a fielding error by center fielder Varsho.

The Dodgers thought they’d executed an inning-ending double play in the fifth. Instead, the video review went against them. Geraldo Perdomo grounded into a fielder’s choice to third that scored Carson Kelly, who doubled leading off, and Arizona trailed 5–1.

Merrill Kelly gave up five runs and eight hits in six innings. The right-hander struck out seven and walked two.

Walker stretched his at-bat in the fourth to 12 pitches, which Kershaw figured kept him from pitching into the seventh. Walker owns four career homers against the three-time Cy Young Award winner.

“I don’t care if he hit a million miles an hour to the warning track, I just wanted an out there,” Kershaw said. “I had thrown fastballs and sliders basically the whole at-bat. Will [Smith] had actually called curveball the pitch before and I shook him off and he fouled off another slider. Curveball for me is always, can I throw it for a strike, and thankfully, I threw it for a strike.”

Walker went down swinging on a 72-mph curveball.

The World Series champion and NL Cy Young Award winner in 1988 tossed a foul ball that landed in the broadcast booth to a fan who made the catch cleanly.

D-backs: RHP Zach Davies (2–4, 4.06 ERA) starts Game 1 of Tuesday’s doubleheader in pursuit of his first win since May 13. He got a no-decision in 5 1/3 innings against the Dodgers last week. RHP Drey Jameson (1–0, 0–0) starts Game 2. He won his MLB debut last week against the Padres with seven scoreless innings.