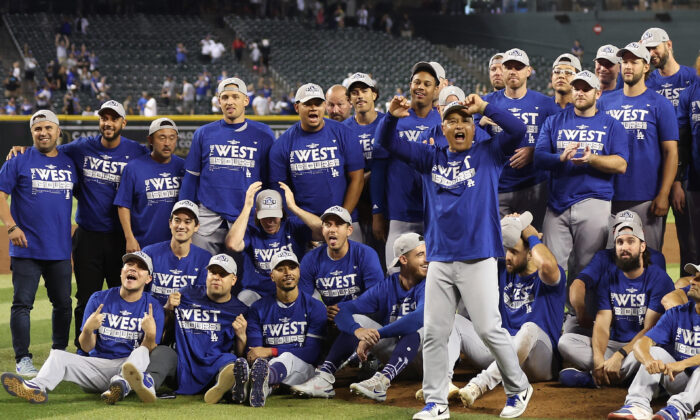 PHOENIX—Clayton Kershaw pitched seven dominant innings and the Los Angeles Dodgers won the NL West for the ninth time in 10 seasons, blanking the Arizona Diamondbacks 4–0 on the night of Sept. 13.

Freddie Freeman, Max Muncy and Joey Gallo homered as the Dodgers boosted the best record in the majors to 98–43.

They lead second-place San Diego by a whopping 20 1/2 games.

Manager Dave Roberts’ team will have plenty of time to get set for its 10th straight year in the postseason.

The Dodgers’ first playoff game is almost a month away, on Oct. 11.

The only season the Dodgers didn’t clinch the division in their recent run was last year—they won 106 times but still finished one game behind San Francisco.

Los Angeles then beat the Giants in the NL Division Series before falling to eventual champion Atlanta in the NLCS.

A crowd of 21,143, mostly clad in Dodger blue, watched the clincher. It’s the Dodgers’ 20th NL West crown since the majors split into divisions in 1969.

Kershaw (8–3) was sharp throughout, allowing just two singles and one walk while striking out five. He threw just 82 pitches, 55 for strikes. He lowered his season ERA to 2.44.

Gallo’s home run, his 17th, cleared the center-field wall and gave the Dodgers a 2–0 lead in the second. The homer was measured at 438 feet.

Muncy led off the inning with a single off Merrill Kelly—literally—as it bounced off the pitcher to the vacated left side of the infield.

Freeman led off the third inning with his 20th homer, a 442-foot drive to right-center into the swimming pool area.

Muncy’s homer, also his 20th, came against Taylor Widener in the seventh.

Kelly (12—6) lasted five innings, losing for the first time in 14 starts. He gave up five hits, walked five and struck out eight. He threw 96 pitches—30 in the long second inning and 29 more in the third.

It was the second straight shutout by the Dodgers in Arizona. Tyler Anderson and two relievers handled the Diamondbacks 6–0 on Monday.

After Tuesday’s win, the Dodgers are 27–5 against Arizona in the last two seasons.

Mookie Betts, back in his usual spot in right field, made a sliding catch in the corner after a long run to take an extra-base hit from Jake McCarthy in the seventh inning. Betts started at second base on Monday.

In the eighth, McCarthy returned the favor, grabbing Betts’ drive down the line in foul territory.

Diamondbacks 1B Christian Walker entered Tuesday with a .318 average against Kershaw with four home runs in 22 at-bats, but he struck out twice and grounded out against the All-Star lefty.

The Dodgers activated RHP Tommy Kahnle from the 60-day injured list on Tuesday and designated RHP Heath Hembree for assignment.

Kahnle, 33, missed three months with forearm inflammation. He has pitched just four games for the Dodgers this season but has postseason experience with the New York Yankees in 2017 and ’19.

“To get a guy who’s pitched in high leverage, pitched in big games, to have him back is huge,” Roberts said. “The timing is good. He hasn’t pitched a whole lot this season, so having a few weeks to get him re-acclimated is a good thing.”

Roberts said 2B Gavin Lux (back), sidelined since Sept. 1, will have a simulated game Wednesday. Roberts said he’s close to returning.

RHP Michael Grove (4.82) makes his third start of the season for the Dodgers against Arizona RHP Zach Davies (2–4, 4.09) Wednesday in the finale of the three-game series at Chase Field.