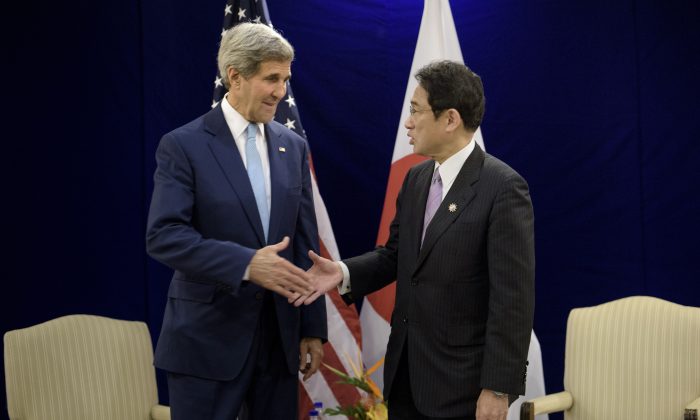 TOKYO—Next week, Secretary of State John Kerry will become the highest-ranking American government official to visit Hiroshima, where 140,000 Japanese died from the first of two atomic bombs dropped by the U.S. in the closing days of World War II more than 70 years ago.

Kerry and other Group of Seven foreign ministers are scheduled to visit Hiroshima Peace Park on Monday and lay flowers to honor the dead. At least in Japan, the event will likely overshadow the rest of the foreign ministers’ annual two-day meeting, where terrorism, maritime security and nuclear non-proliferation will be discussed.

Japan hopes the meeting in Hiroshima will revive the momentum for efforts to stop the spread of nuclear weapons, a cause that has flagged in recent years. Weapons stockpiles have been slow to decline, and Japan’s own accumulation of plutonium for use in power generation has caused security concerns.

Expectations are now running high among Japanese for President Barack Obama, a Nobel peace laureate who has proposed a nuclear-free world, to follow suit during the G-7 leaders’ summit in May, to be held in the coastal city of Shima in central Japan.

“Of course it would be best if Obama-san comes,” said Sunao Tsuboi, a 90-year-old A-bomb survivor and head of the Hiroshima branch of a large survivors’ organization. “I hope he overcomes contentions surrounding the atomic bombings.”

For many years, senior U.S. government officials avoided going to Hiroshima because of political sensitivities. Many Americans believe the dropping of the atomic bombs on Hiroshima and Nagasaki in August 1945 were justified and hastened the end of the war.

Japanese atomic bomb survivors’ groups, meanwhile, have campaigned for decades to bring top officials from the U.S. and other nuclear weapon states to see Hiroshima’s scars as part of a grassroots movement to abolish nuclear weapons. They are not seeking an apology.

No serving U.S. president has visited the site. It took 65 years for a U.S. ambassador to attend Hiroshima’s annual memorial service, and six more years to achieve Kerry’s visit.

Long and delicate negotiations were needed to arrange the group visit for the six foreign ministers to the peace park and nearby museum, Japanese Foreign Minister Fumio Kishida said, because of differences of opinion on atomic weapons among G-7 members, which include Germany, Italy, Britain, Canada, France, the U.S. and Japan. France and Britain, along with the U.S., have nuclear weapons.

“At long last, we have obtained an agreement from each member country,” said Kishida, a Hiroshima native.

Kishida hopes to win agreement on issuing a “Hiroshima declaration” in addition to the ministers’ final communique that will draw renewed attention to nuclear disarmament and non-proliferation efforts. Japanese officials say the international community’s resolve to stop the spread of nuclear weapons has weakened amid U.S.-Russia tensions over Ukraine, North Korea’s nuclear program and distraction by the Middle East conflict.

Hiroshima today is a bustling city of about 1.2 million, home to carmaker Mazda and the popular Carp baseball team. But the skeletal remains of a domed building that has become a symbol of the bombing, and peace, still stand near the epicenter.

Just having the G-7 ministers in town is “a golden opportunity to show the reality of the atomic bombing,” Mayor Kazumi Matsui said.

Just having the G-7 ministers in town is ‘a golden opportunity to show the reality of the atomic bombing.’
— Mayor Kazumi Matsui

Tsuboi, the A-bomb survivor, has been invited to a Monday luncheon with the ministers but hasn’t been told whether he will get to meet them. Tsuboi says he will be content just to see Kerry and his counterparts bow and observe a moment of silence because he thinks that would send a powerful message.

“That’s good enough. The gesture would make everyone feel good,” he said. “It would be a message of peace and friendship, on which everyone can agree.”

Tsuboi, who survived the bombing despite severe injuries that left him unconscious for weeks, says he has long since lost a desire to seek an apology from the U.S. Instead, he wants to devote his life to seeking a world without war, nuclear weapons or killing. While fighting cancer, anemia and heart problems, Tsuboi travels around the globe to share his narratives for the cause.

“I only care about a world where human beings can live together in peace,” he said.

State Department spokesman Mark Toner said in Washington this week that Kerry’s visit to the Hiroshima memorial isn’t expected to trigger opposition because it’s “to honor the memory of all those who died during World War II” and to underscore Obama’s vision of a nuclear-free world.

“As much as we acknowledge the past, we look to the future,” Toner told reporters.

For Japan, the emphasis on non-proliferation helps to soften its global image as it steps up its military posture and causes concern over its plutonium stockpiles, said Koichi Nakano, an international politics professor at Sophia University in Tokyo.

The White House declined to comment on whether Obama planned to visit Hiroshima during the May summit.

“It is a touchy, sensitive subject, and many Americans don’t want to really revisit that past,” Jeff Kingston, director of Asian studies at Temple University Japan, said about Kerry’s — and possibly Obama’s — visit. “But I think it’s high time that they did so.”