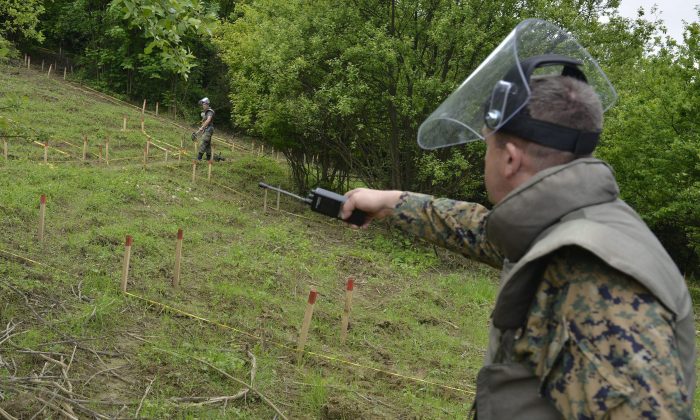 Bosnian soldiers repair warning signs and search for landmines in fields near the banks of the river Bosnia which flooded a town near Sarajevo, May 20. The flooding unearthed landmines left over from Bosnia’s 1992-95 war and washed away the signs that marked them. (AP Photo/Sulejman Omerbasic)
Canada

OTTAWA—The Canadian foreign minister who was a driving force behind a groundbreaking treaty to ban landmines 17 years ago says he sees encouraging signs that the United States will finally sign on.

Former Liberal foreign minister Lloyd Axworthy says American support would be a major boost to the treaty, which the U.S. and three dozen other countries have snubbed since it was signed in Ottawa in 1997.

This week Secretary of State John Kerry said his country was going to look at joining the Ottawa Convention.

“It’s been a long haul. It’s been 17 years,” Axworthy said in an interview, noting that the treaty has more than 160 member countries.

In a column published earlier this week in USA Today, Kerry said landmines remain a hazard in 60 countries. “Decades after soldiers have laid down their weapons and leaders have made peace, these grim legacies of war kill and maim local populations.”

Kerry said his government has spent US$2.3 billion in 90 countries since 1993 to eradicate the weapons. He also noted his government’s announcement in September that the U.S. would no longer use landmines except in the Korean Peninsula.

“And we will work to find ways that may ultimately allow us to accede to the Ottawa Convention—the international treaty that prohibits the use, stockpiling, production and transfer of anti-personnel land mines.”

Reports of anti-personnel landmine use in Syria and the fact that dormant mines are still killing innocent civilians in dozens of post-war countries show there is still a pressing need to work towards a global ban on their use, said Axworthy.

“Having the Americans put some new energy into it is a great step, and welcome. It should give some momentum to the ongoing campaign behind the treaty.”

Axworthy said he hopes the renewed U.S. interest might spur the Harper government to do more to support the clearance efforts of the deadly weapon.

“I hope one of those areas which will take note will be the country north of the them because there’s been significant cutbacks of Canadian government support.”

The most recent edition of the International Landmine Monitor, released last week, noted that Canada’s support has waned substantially in recent years.

Paul Hannon, executive Director of Mines Action Canada, said the U.S. deserves credit for being the top donor to mine clearance. But he said it is disappointing that Canada has dropped out of the top five, falling to 14th position last year with its smallest contribution to the treaty’s eradication provisions since they came into force in 1999.

Given Kerry’s remarks and the level of U.S. spending, Hannon urged Ottawa to push Washington to join the treaty.

“These are steps towards joining the Ottawa Treaty and we encourage all 35 countries still outside the mine ban treaty to join. Only by being fully and legally bound will we eliminate landmines,” he said.

“The U.S. just needs to take one more step and Canada should be doing everything we can to help them take (it).”

The office of Foreign Affairs Minister John Baird had no comment to a request for response.

Axworthy said he’s disappointed that the Harper government hasn’t taken a more active role on landmine eradication because Canada has a “good track record” on it. He said Canada is “missing an opportunity” to make a difference on an issue it once led internationally.

“The Conservative party were supporters at the time of the treaty, when we brought all the parties together,” he said.

“It wasn’t a matter that this was some kind of Liberal gambit. It was something the entire country got involved in.”