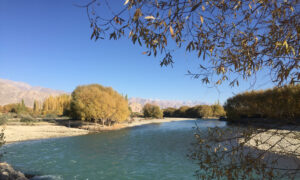 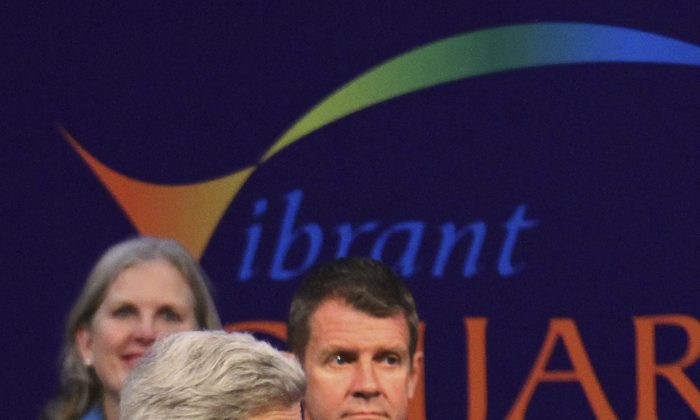 U.S. Secretary of State John Kerry, left, and Indian Prime Minister Narendra Modi greet each other at the Vibrant Gujarat summit in Gandhinagar, India, Sunday, Jan. 11, 2015. Kerry is in India to attend an international investment conference and push trade ties with the giant South Asian nation ahead of visit by President Barack Obama later this month. (AP Photo/Ajit Solanki)
India

AHMEDABAD, India—U.S. Secretary of State John Kerry on Sunday called for a rapid expansion of U.S.-India trade and commercial ties as he attended an international investment conference ahead of visit by President Barack Obama later this month.

Kerry led the U.S. delegation to the investment summit in Ahmedabad, the main financial city in Indian Prime Minister Narendra Modi’s home state of Gujarat. Kerry said it was imperative that economic ties between the two countries grow for the sake of Indian development, reducing poverty and fighting climate change.

Commerce and investment between the United States and India have jumped in recent years, growing nearly five-fold since 2000 with bilateral direct investment at almost $30 billion. But it still faces obstacles dues to restrictive Indian laws and regulations and concerns about intellectual property rights and protection. In addition, talks on liability issues that have kept American nuclear power operators from doing business in India have been inconclusive to date.

U.S. officials said they were working on agreements that could include a solar energy deal, a plan to improve rural electrification and potentially a carbon reduction pact that they hoped could be signed when Obama visits India to participate in India’s annual Republic Day ceremonies on Jan. 26. Modi has invited Obama to be the “chief guest” at the celebration, the first sitting American president to be so honored.

Last year, to the surprise of many, Obama was able to seal a carbon emissions reduction pact with China during a visit to Beijing. The U.S., China and India are the largest emitters of carbon.

Kerry has made fighting climate change, largely through clean and sustainable energy development and reducing emissions, a priority. He has given a number of speeches on the dangers facing the planet if urgent action is not taken, and Sunday’s address in Ahmedabad was no exception.

“There is one enormous cloud hanging over all of us which requires responsibility from leaders,” he said. “Global climate change is already violently affecting communities not just across India but around the world. It is disrupting commerce, development, and economic growth. It’s costing farmers crops. It’s costing insurance companies unbelievable payouts. It’s raising the cost of doing business, and believe me, if it continues down the current trend-line, we will see climate refugees fighting each other for water and seeking food and new opportunity.”

Kerry met separately with Modi and U.N. chief Ban Ki-moon, and planned talks with the prime minister of the tiny Himalayan kingdom of Bhutan, marking a rare cabinet-level meeting between the two nations.

Between meetings, Kerry took time out to visit Mahatma Gandhi’s former home and ashram on the city’s outskirts, touring the site where the Indian independence champion lived from 1917 until 1930.

Gandhi organized many of his nonviolent protests against British rule from the cottage and Kerry noted in the guest book that it was “a great privilege to visit this remarkable house from which so much thought and action changed the world.”