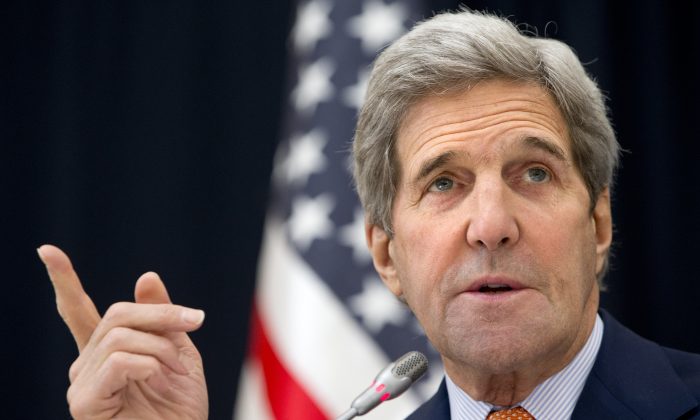 Secretary of State John Kerry speaks to members of the media at King Salman Regional Air Base in Riyadh, Saudi Arabia, on Jan. 23, 2016. (AP Photo/Jacquelyn Martin)
US

RIYADH, Saudi Arabia—Secretary of State John Kerry met with Gulf Arab officials on Saturday to ease their concerns about warming U.S.-Iranian ties and seek consensus on which Syrian opposition groups should be represented at upcoming peace talks.

Kerry and Saudi Foreign Minister Adel al-Jubeir presented a united front when they spoke at a news conference after a meeting of foreign ministers from the Gulf Cooperation Council. The Gulf states have sided with the kingdom in its spat with Iran and backed the rebels fighting to overthrow Syrian President Bashar Assad, a key ally of the Islamic Republic.

Kerry and al-Jubeir said the U.S. and the GCC agreed on the need to confront destabilizing Iranian activities in the region and on an unspecified “understanding” that will allow the U.N.-led Syria negotiations to begin next week as planned.

“Let me assure everybody that the relationship between the United States and the GCC nations is one that is built on mutual interest, on mutual defense and I think there is no doubt whatsoever in the minds of the countries that make up the GCC that the United States will stand with them against any external threat,” Kerry said.

Al-Jubeir denounced Iran for its “hostile and aggressive stance” against Arab nations. But he said he did not believe that the Washington would act rashly in dealing with Tehran because of the nuclear deal just put in place. It has given Tehran access to billions in formerly frozen assets.

“Overall, the United States is very aware of the mischief that Iran’s nefarious activities can do in the region,” Jubeir said. “I don’t believe the United States is under any illusion as to what type of government Iran is.” He criticized Iran for briefly taking 10 U.S. sailors captive in early January, saying “normal countries do not act like this.”

He took a swipe at Iran by noting that in the prisoner swap that resulted in the release of four imprisoned Americans in Iran, none of the seven Iranians cleared of charges in the United States opted to return to Iran. It “tells you what a great country Iran is that no one wanted to return to it.” Six of the seven are dual nationals.

Kerry avoided such blunt criticism of Iran but stressed that the U.S. shares concerns about Iran’s behavior and will act against it when necessary, including imposing new sanctions as it did last week in response to Iranian ballistic missile tests.

Shiite-led Iran and Sunni-ruled Saudi Arabia are longtime regional rivals who support opposite sides in the wars in Syria and Yemen. Relations plunged to a new low when Saudi Arabia executed a prominent Shiite opposition cleric earlier this month, drawing outrage from Shiites across the region and igniting mob attacks on Saudi diplomatic missions in Iran.

Saudi Arabia and some of its allies responded to those attacks by cutting diplomatic ties with Tehran, and accusing Tehran of being behind numerous terrorist attacks around the world over the past three decades.

Riyadh and Tehran have said the mutual animosity will not affect the Syria talks. But there are serious disagreements over who can represent the opposition at the negotiations, which were initially supposed to begin on Monday but are likely to be delayed for several days.

Kerry said that despite disagreements over who should attend, an “understanding” had been reached on how to begin the talks. He did not elaborate, but said the more than 20 nations and groups that make up the International Syria Support Group would meet almost immediately after the first round of peace negotiations to address any issues that arise in Geneva.

“We are quite confident that there is a way to invite the various interested stakeholders that provides for cohesion and the ability to make the process move forward,” he said.

Kerry is in Saudi Arabia on the second leg of his latest round-the-world diplomatic mission, which began in Switzerland and will also take him to Laos, Cambodia and China.