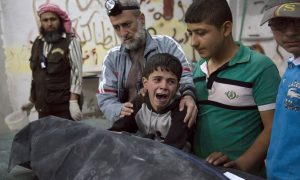 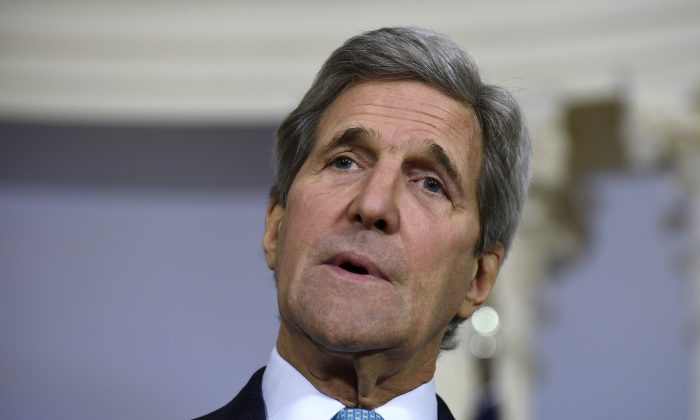 In this March 9, 2016, file photo, Secretary of State John Kerry speaks to reporters at the State Department in Washington. The State Department and Pentagon ordered the families of U.S. diplomats and military personnel Tuesday to leave posts in southern Turkey due to “increased threats from terrorist groups” in the country. (AP Photo/Susan Walsh, File)
Middle East

GENEVA—U.S. Secretary of State John Kerry has opened a second day of talks in Geneva aimed at finding a way to restore at least a partial truce in Syria amid continuing attacks in Aleppo.

Kerry met on Monday with Saudi Foreign Minister Adel al-Jubeir and planned to meet later with the U.N. envoy for Syria, Staffan de Mistura. Kerry said progress was being made toward an understanding on how to reduce the violence in Aleppo but that more work was needed.

Al-Jubeir called the situation in Aleppo with continued airstrikes an “outrage” and a criminal violation of humanitarian law. He said that Syrian President Bashar Assad would be held accountable for the attacks and would be removed from power either through a political process or by force.

“There is only one side that is flying airplanes, and that is Bashar al-Assad and his allies, so they are responsible for the massacre of women, children, and the elderly,” he said. “They are responsible for the murder of doctors and medical personnel, and this situation, any way you slice it, will not stand. The world is not going to allow them to get away with this.”

Kerry’s meetings in Geneva come a day after the Syrian military extended a cease-fire around the capital for another 24 hours and relative calm set in across much of the country apart from Aleppo, the country’s largest city and a key battleground in the civil war. Aleppo is not covered by the cease-fire but saw less fighting. More than 250 people have died in shelling and airstrikes in the northern city over the last nine days, according to the Britain-based Syrian Observatory for Human Rights.

The government declared its own cease-fire around Damascus and the coastal Latakia region Friday following two weeks of escalating unrest. But more than three dozen rebel factions said Saturday they would not respect the truce unless the government agreed to extend it over the whole country.

For Aleppo, the U.S. is considering drawing up with the Russians a detailed map that would lay out “safe zones.” Civilians and members of moderate opposition groups covered by the truce could find shelter from persistent attacks by Assad’s military, which claims to be targeting terrorists. One U.S. official said “hard lines” would delineate specific areas and neighborhoods. The officials spoke on condition of anonymity because they were not authorized to discuss the matter publicly.

It was not immediately clear whether Russia would accept such a plan or if Moscow could persuade the Assad government to respect the prospective zones. Some U.S. officials are skeptical of the chances for success, but also note that it is worth a try to at least reduce the violence.