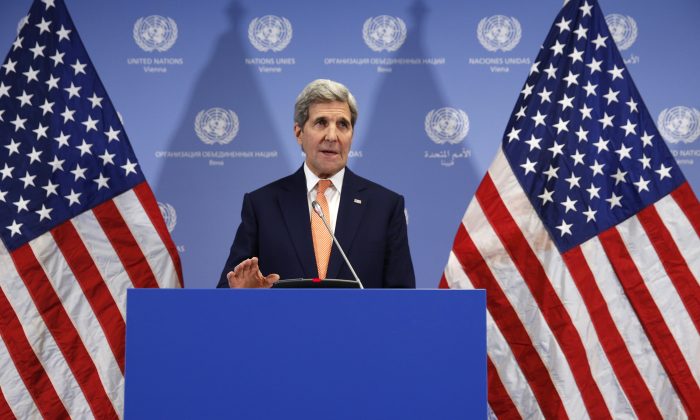 U.S. Secretary of State John Kerry delivers a statement that sanctions will be lifted on Iran after the International Atomic Energy Agency (IAEA) verified that Iran has met all conditions under the nuclear deal, in Vienna, Saturday Jan. 16, 2016. (Kevin Lamarque/Pool via AP)
Politics

DAVOS, Switzerland—U.S. Secretary of State John Kerry took aim Friday at government corruption, saying it fuels crime, violent extremism and disillusionment with society that contributes to the global refugee crisis. He also said the Obama administration will seek a major boost in funding for refugee support this year and press for at least 10 new countries to offer resettlement programs.

Speaking Friday at the World Economic Forum in Switzerland, Kerry said the U.S. would redouble its commitment to fighting corruption as a national security priority that costs the global economy some $2.6 trillion a year and “complicates every single security, diplomatic, and social initiative we undertake.”

“We have to acknowledge in all quarters of leadership that the plagues of violent extremism, greed, lust for power, and sectarian exploitation often find their nourishment where governments are fragile and leaders are incompetent or dishonest,” Kerry said in a keynote address to the forum.

He noted that graft and ineffective governance had either caused or contributed greatly to crises in Iraq, Nigeria, Syria, Ukraine, Libya and Yemen and thus had become an international, rather than purely domestic, problem.

“The fact is there is nothing, absolutely nothing, more demoralizing and disempowering to any citizen of any nation than the belief the system is rigged against them and that people in positions of power are — to use a diplomatic term of art — crooks who are stealing the future of their own people; and by the way, depositing their ill-gotten gains in ostensibly legitimate financial institutions around the world,” Kerry said.

He said corruption is a social danger, a radicalizer used as a recruitment tool by extremist groups, and a destroyer of opportunity.

“The bottom line is that it’s everybody’s responsibility to condemn and expose corruption, to hold perpetrators accountable, and to replace a culture of corruption,” Kerry said.

“Never forget: the impact of corruption touches everyone,” he said. “We all pay for it. So we have to wage this fight collectively — not reluctantly, but wholeheartedly by embracing standards that make corruption the exception, not the norm.”

On refugees, Kerry said the U.S. will encourage donors to increase financing for worldwide humanitarian appeals by 30 percent, from $10 billion to $13 billion a year.

These calls will be a centerpiece of a refugee summit that President Barack Obama will host at the U.N. General Assembly this fall, Kerry said.