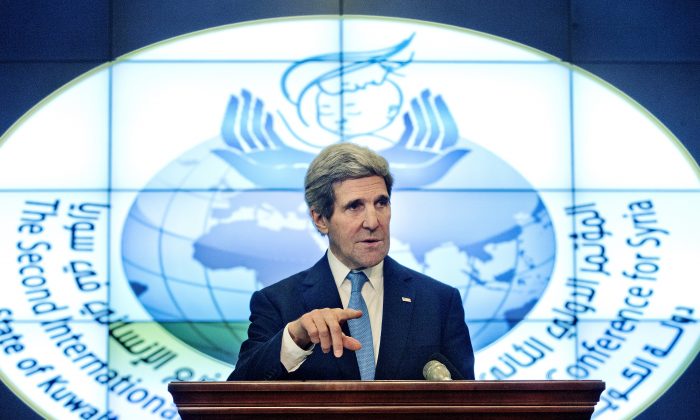 PARIS—A ceasefire between Syria’s government and opposition could be just weeks away from reality, U.S. Secretary of State John Kerry said on Tuesday as he visited Paris to show solidarity with France after last week’s attacks.

Speaking to reporters at the residence of the U.S. ambassador to France, Kerry said the ceasefire envisioned by the political process agreed upon in Vienna on Saturday would exponentially help efforts to fight the Islamic State group, which has claimed responsibility for the Paris attacks that killed 129 people, as well as end the drawn-out Syrian conflict, which has gone on for over four years.

“That’s a gigantic step,” Kerry said. “If we can get that done, that opens up the aperture for a whole bunch of things. We’re weeks away conceivably from the possibility of a big transition for Syria, and I don’t think enough people necessarily notice that. But that’s the reality.”

Saudi Arabia is expected to host a meeting of Syrian opposition figures by mid-December, at which they are to agree on a delegation to send to talks with representatives from President Bashar Assad’s government. Once those negotiations begin, a ceasefire is to take effect, according to the agreement reached in Vienna.

Such a ceasefire would free nations supporting Syria’s various factions to concentrate more on the Islamic State, which is ineligible for the truce and has come under greater military scrutiny since Friday’s attacks in Paris.

“Out of this event in Paris will come an even greater level of vigilance and cooperation in some places that may have been a little bit less concerned about things hitting them in certain parts of the world,” Kerry said.

Earlier Tuesday, Russia said its investigation into the crash of a Russian passenger jet in Egypt’s Sinai Peninsula had determined it was brought down by a bomb. An Islamic State affiliate had already claimed responsibility for downing the plane. Russian President Vladimir Putin has vowed to hunt down those responsible and punish them.

Kerry began his day on Tuesday in meetings with staffers at the U.S. Embassy in Paris and French President Francois Hollande.

With Hollande, Kerry said the civilized world must boost its efforts to combat the Islamic State by going after the group at its core. He said the plane downing, along with recent attacks in Lebanon and Turkey made it clear that more pressure must be brought to bear on the Islamic extremists.

“My sense is everybody understands that with Lebanon’s attacks, with what’s happened in Egypt, with Ankara, Turkey and attacks in Paris, we have to step up our efforts to hit them at the core where they’re planning these things and also obviously to do more on borders in terms the movement of people,” he said.

Hollande plans to visit Washington within the next week to meet with President Barack Obama to discuss further cooperation on fighting Islamic extremism and dealing with Syria.

Before seeing Hollande, Kerry met with diplomats from the U.S. Embassy in Paris to thank them for their service.

He told embassy staffers that the bonds between the United States and France are stronger than ever and that Friday’s attacks were an assault on civilization and common decency.

“This is just raw terror,” he said, vowing that the campaign against the Islamic State group will succeed. “We will end the scourge of Daesh,” he said, referring to the group by its Arabic acronym.