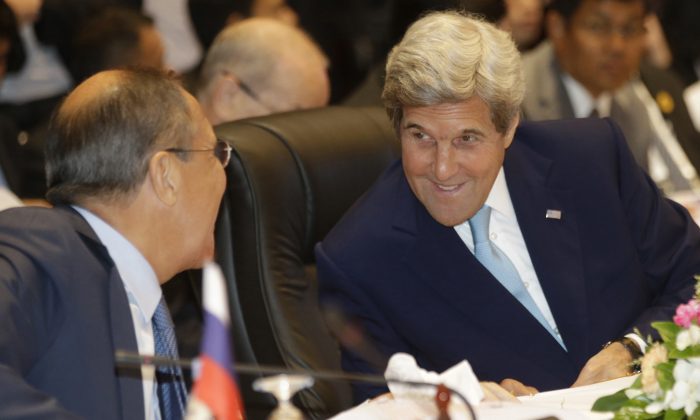 Kerry: Progress With Russia on Syria Despite Military Doubts

VIENTIANE, Laos—U.S. Secretary of State John Kerry said progress is being made with Russia on a potential military partnership that could strengthen a faltering truce in Syria despite grave doubts expressed by the Pentagon and joint chiefs of staff.

Speaking Tuesday after meeting Russian Foreign Minister Sergey Lavrov in Laos, Kerry made no promises of success but said he hoped discussions with Russia could produce a tangible result in the next week to 10 days.

“My hope would be that somewhere in early August — the first week or so, somewhere in there — we would be in a position to be able stand up in front of you and tell you what we’re able to do with the hopes that it can make a difference to the lives of people in Syria and to the course of the war,” he said.

His comments followed remarks from Defense Secretary Ash Carter on Monday in which he said Kerry’s efforts with Russia have been complicated by the fact that Russia is focused mainly on supporting the Syrian government, which he said has had the effect of prolonging the civil war.

“We had hoped that they would promote a political solution and transition to put an end to the civil war, which is the beginning of all this violence in Syria, and then combat extremists rather than moderate opposition, which has to be part of that transition,” Carter said at a Pentagon news conference with Gen. Joseph Dunford, chairman of the Joint Chiefs of Staff. “So they’re a long way from doing that.”

When a reporter told Carter that he sounded unenthusiastic about the Kerry effort, Carter said, “No, I’m very enthusiastic about the idea of the Russians getting on side and doing the right thing. And I think that would be a good thing if they did. I think we’re a ways from getting that frame of mind in Russia. But that’s what Secretary Kerry is working toward.”

Kerry said he appreciated Carter’s words and that his talks with Lavrov, as well as technical discussions at lower levels, would be continuing “to work through to details in order to make certain that the doubts expressed by Secretrary Carter by Chairman Dunford or doubts expressed by (Russian) President (Vladimir) Putin and the Russians are going to be addressed ahead of time.”

Kerry has been talking to Russian officials about a proposal in which the U.S. would share intelligence and targeting information with the Russians. In exchange Moscow would use its influence with the Syrian regime to effectively ground the Syrian air force and promote a political solution to a civil war that has killed as many as a half a million people.

Both Carter and Dunford said any arrangement with the Russians to coordinate military action in Syria would be transactional and not based on trust.

Kerry’s talks with Lavrov in Laos on Tuesday and with Putin in Moscow 10 days ago came after a leaked proposal showed the U.S. offering Russia a broad new military partnership against IS and the Nusra Front, which is al-Qaida’s Syrian affiliate. Several conditions would apply, including Russia committing to grounding Syria’s bombers and starting a long-sought political transition process.

Dunford denied reports that U.S.-backed opposition forces have coordinated with Nusra in some cases.

“We don’t have any indication that the forces that we are providing support to in Syria are cooperating or intermingled with al-Nusra,” the general said.