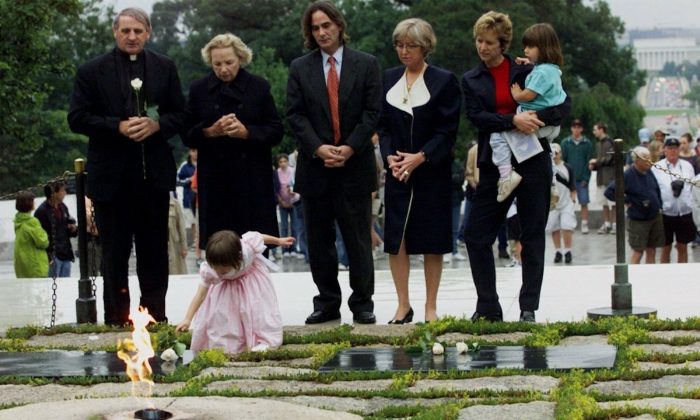 Mary Kerry Kennedy, the daughter of former Sen. Robert F. Kennedy, posted a tribute to her niece after she died of a suspected overdose.

Kerry posted four family photos of Saoirse Kennedy Hill, who was found dead her home in Cape Cod, Massachusetts, and issued a statement about her death.

“Our hearts are shattered by the loss of our beloved Saoirse,” Kerry wrote on Instagram, alongside a photo with the student. “Her life was filled with hope, promise, and love.”

Our hearts are shattered by the loss of our beloved Saoirse. Her life was filled with hope, promise and love. She cared deeply about friends and family, especially her mother Courtney, her father Paul, her stepmother Stephanie, and her grandmother Ethel, who said, “The world is a little less beautiful today.” She lit up our lives with her love, her peals of laughter and her generous spirit. Saoirse was passionately moved by the causes of human rights and women’s empowerment and found great joy in volunteer work, working alongside indigenous communities to build schools in Mexico. We will love her and miss her forever.

Kerry is the sister of Saoirse’s mother Courtney Kennedy Hill, and she is also one of Ethel and Robert F. Kennedy’s 11 children. Kerry, a human rights activist and writer, is also the ex-wife of New York Gov. Andrew Cuomo.

Hill wrote about her battle with depression and taking her own life in a high-school newspaper, it was reported.

“My depression took root in the beginning of my middle school years and will be with me for the rest of my life,” Saoirse wrote in a 2016 piece for  Deerfield Scroll.

In the paper, Hill said she began “isolating” herself in her room and began “pulling away” from her relationships with friends and family.

“We all know that some people find winter at Deerfield lonely, dark, and long,” she added. “During the last few weeks of spring term, my sadness surrounded me constantly. But that summer after my sophomore year, my friend depression rarely came around anymore, and I was thankful for her absence.”

Later, she said the sadness came back.

“I went to treatment for my depression and returned to the valley for my senior year,” she explained. “I didn’t care that students thought that I had left because of an eating disorder, or that I had been bullied, but it concerned me that my teachers and advisors didn’t know what I had been going through. Even though it was helpful for me to discuss my struggles with all of those important people in my life, it was still uncomfortable, and it was hard for me to take the initiative.”

Other Kennedy family members issued statements about her death.

“The world is a little less beautiful today,” Ethel Kennedy, 91, was quoted as saying in a statement, according to Fox News.

“Our hearts are shattered by the loss of our beloved Saoirse,” the Kennedy family said in a statement about Hill. “Her life was filled with hope, promise and love. She cared deeply about friends and family, especially her mother Courtney, her father Paul, her stepmother Stephanie, and her grandmother Ethel.”

One of Hill’s relatives, former U.S. Rep. Patrick Kennedy tweeted in tribute to her on Friday.

“Saoirse will always remain in our hearts. She is loved and will be deeply missed,” he wrote.
TOP NEWS