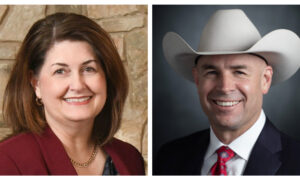 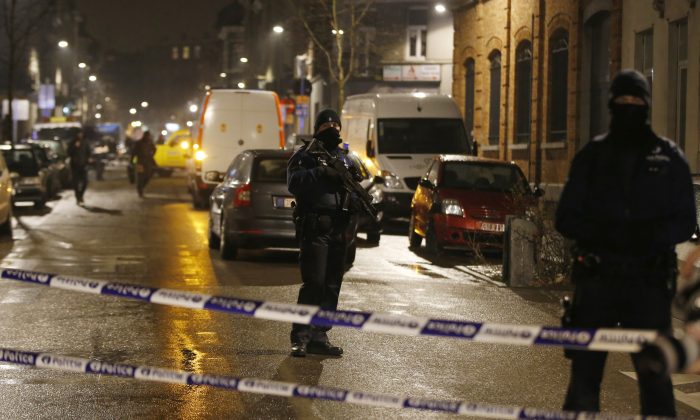 Police take up positions on a road as they guard check points during a police raid in the suburb of Schaerbeek in Brussels, Thursday, March, 24, 2016. Belgium's prime minister refused to accept the resignations of his justice and interior ministers Thursday despite increasing evidence of intelligence and law enforcement failures to prevent this week's suicide bombings by Islamic militants. (AP Photo/Alastair Grant)
US

BRUSSELS—U.S. Secretary of State John Kerry is holding counterterrorism talks in Brussels on Friday as top members of Belgium’s embattled government face ongoing criticism for a series of security and intelligence failings in the run-up to this week’s bomb attacks in the city that killed 31 people and wounded 270.

Kerry’s arrival Friday morning comes hours after at least six people were detained in raids linked to Tuesday’s attacks on the Brussels airport and subway system. Belgian prosecutors are expected to decide later Friday whether to charge or release them.

French counterterrorism police also detained a man Thursday who officials say was in the advanced stages of an attack plot. Officials told The Associated Press that the suspect, Reda Kriket, 34, had a past Belgian terrorism conviction and was linked to the suspected ringleader of the Paris attacks, Abdelhamid Abaaoud.

Amid signs that life in Brussels was returning to some sort of normality on the third day of mourning the dead, authorities lowered Belgium’s terror-threat level by one notch. However, they said the situation remained grave and another attack is “likely and possible.” Belgium had been on its highest alert since Tuesday’s bombings.

As well as meeting with officials from Belgium and the European Union, which is based in Brussels, Kerry is due to pay his respects to the victims of this week’s attacks, which he says underscore the urgent need for a unified front against the Islamic State group.

Belgian authorities have faced criticism for missing a series of signals pointing to a pending attack, and pressure is mounting on the government domestically and internationally. Belgium’s interior and justice ministers — who tried to resign this week but were told to keep working by the prime minister — are debating the airport and subway attacks with the country’s lawmakers Friday.

Authorities have formally linked the Brussels bombings and the Nov. 13 attacks that left 130 dead in Paris. Both were apparently carried out by the same Belgium-based Islamic State cell.

Some of the Brussels attackers had been on the run from authorities in France and Belgium but were still able to hide in safe houses, assemble bombs and carry out linked attacks.

Turkey announced this week that it had warned Belgium last year that one of the Brussels attackers, Ibrahim El Bakraoui, had been flagged as a “foreign terrorist fighter.”

The intelligence shortcomings have prompted European authorities to call for quicker and more efficient intelligence cooperation.

A manhunt is underway for one of the Brussels airport attackers who was recorded on a surveillance video and had fled the scene. Prosecutors have not said how many attackers there were in total, or how many accomplices might be at large.

Belgian prosecutors said the raids Thursday night targeted central Brussels, Jette and the Schaerbeek neighborhood, where police had earlier found a huge stash of explosives and bomb-making material in an apartment used by the Brussels attackers.

Elsewhere, Belgium’s nuclear agency said Friday that it has withdrawn the entry badges of some staff and denied access to other people recently amid concern the country’s nuclear plants could be a target for extremists.

Nuclear control agency spokeswoman Nele Scheerlinck said the move at some plants “is not necessarily linked with the terrorist attacks,” noting that the decision to deny access usually takes weeks.

The dead and wounded in the Brussels attacks came from dozens of countries, and are still being identified.

The Netherlands’ foreign minister said Friday that three of the dead at the airport were Dutch citizens. Bert Koenders said the victims were a woman from the eastern city of Deventer and a brother and sister from the southern Limburg province who live in the United States. He did not release their identities.

Angela Charlton and John-Thor Dahlburg in Brussels, Lori Hinnant in Paris and Mike Corder in The Hague contributed to this report.