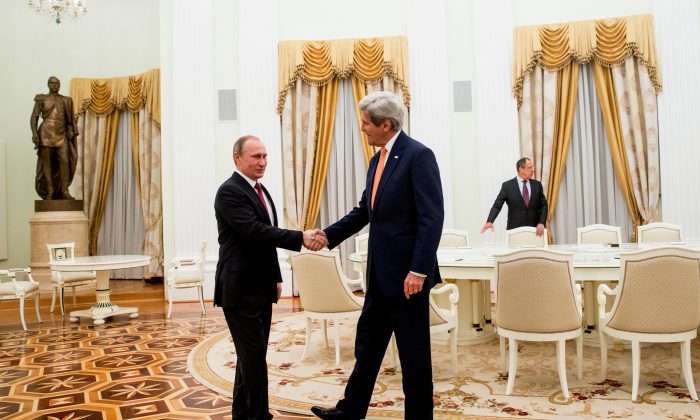 Secretary of State John Kerry (R) and Russian President Vladimir Putin before a meeting at the Kremlin in Moscow, Russia, on March 24, 2016. (AP Photo/Andrew Harnik)
Politics

Kerry Hopes for Progress on Syria, Ukraine in Moscow Talks

MOSCOW — U.S. Secretary of State John Kerry on Thursday voiced hope that Washington and Moscow could narrow their differences on Syria and Ukraine as he sat down for talks with Russian President Vladimir Putin.

Kerry said he hoped the talks would be constructive and allow the nations to find a way to “rebuild and strengthen the relationship between the United States and Russia by proving that we know how to solve some serious problems together and building from there.”

Kerry hailed a U.S.- and Russian-brokered cease-fire in Syria, adding that it had allowed the Syrians “to taste and smell the possibilities of what it means to have a huge reduction in violence and to receive humanitarian assistance.”

“We obviously also have some ideas about this and how we can most effectively make progress in Geneva and begin the very serious and difficult work of the transition,” he said in a reference to Syria peace talks in Geneva.

In a playful start to the talks, Putin noted that Kerry walked off the plane carrying his briefcase himself and joked that he must have brought some cash to bargain with Russia.

Kerry replied, “When we have a private moment I will show you what’s in my briefcase and I think you will be surprised.”

Switching to a serious tone, the Russian leader said he hoped for a constructive discussion that would “allow us to make our positions on Syria and Ukraine closer.”

Kerry is seeking clarity from Putin and Lavrov as to where Russia stands on a political transition for Syria, particularly on the future of President Bashar Assad, now that a fragile truce is holding and U.N. brokered peace talks are underway.

The main Syrian opposition group has wrapped up the latest round of indirect peace talks by urging Russia to “use its leverage” on President Bashar Assad’s government to fulfil international hopes for a political transition.

In Geneva, Bassma Kodmani, a leader of the opposition High Negotiations Committee, told reporters Thursday that it wants greater access for humanitarian aid and decried continued sieges by government forces on Syrian municipalities.

The U.S. and Russia have been at odds over Syria since the conflict began more than five years ago, with Washington demanding Assad’s ouster and Moscow saying it is up to the Syrian people to determine their leadership.

Kerry’s meetings were arranged after Putin made a surprise announcement last week that Russian troops would partially withdraw from Syria after five months of military operations in support of Assad’s government.

The other current significant difference between the U.S. and Russia is the situation in Ukraine where Washington accuses Moscow of not doing enough to push pro-Russian separatists in the east to comply with a ceasefire.

Russia, meanwhile, has complained that the Ukrainian government is dragging its feet on implementing the ceasefire.

Kerry Says ISIS Is Committing Genocide Against Christians and Other Minorities

Fighting in Ukraine’s industrial heartland, which has close ties to Russia, has killed more than 9,100 people and left large swaths of land under rebel control. Germany, France and Russia mediated talks between the Ukrainian government and the Russian-backed separatists in Minsk, Belarus, which resulted in the truce agreement.

That has largely held, but none of the political elements, including calling a local election, has been implemented.

Kiev insists it can’t hold the vote because it cannot guarantee security for election officials. For their part, the rebels have said they won’t allow Ukrainian right-wing parties to run, which the Ukrainian government says also makes the election impossible.

Kerry was to raise concerns about a recent sharp increase in cease-fire violations and press Russia to do more to get the separatists in line. Unless there is “true quiet” and full access for cease-fire monitors, U.S. officials say it will be difficult to get progress on other parts of the Minsk deal.

Kerry will also raise the case of Nadezhda Savchenko, a Ukrainian pilot who was sentenced to 22 years in prison in Russia on Tuesday on charges the U.S. says are false. Savchenko was convicted of complicity to murder in the 2014 deaths of two Russian journalists in eastern Ukraine, opening a door to a possible prisoner swap between the two countries.

The U.S. has repeatedly called for Savchenko, who is also a member of parliament, to be released and did so again on Tuesday. Ukraine has suggested trading two Russian prisoners for Savchenko and U.S. officials say Kerry would encourage Russia to accept the proposal.