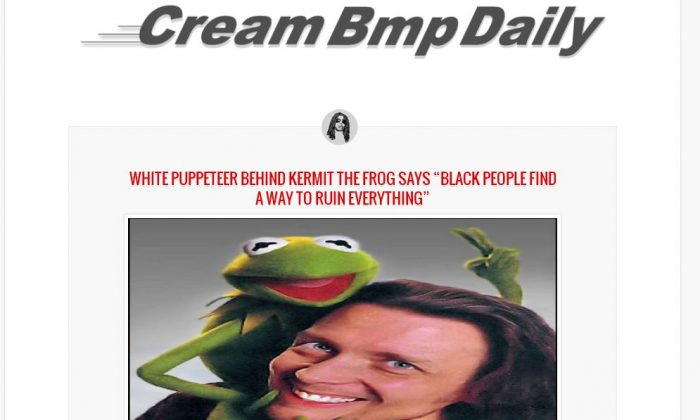 An article saying the puppeteer behind Kermit the Frog made a disparaging remark towards black people is fake. (Cream BMP screenshot)
Social Media

An article saying the puppeteer who is behind Kermit the Frog made a disparaging remark towards African-American people is fake.

The article, titled “White Puppeteer behind Kermit the Frog says ‘Black people find a way to ruin everything,'” was posted on Cream BMP Daily, a “satirical” news website.

The article says “Steven Wildfire” is the puppeteer but his name is actually Steve Whitmire.

The bogus report says, “Steven Wildfire wrote on Instagram that the quotes, memes, and pictures that black people are putting beside his frog is just another example of them finding a way to ruin everything.’We gave them Tommy Hilfiger they wore it ten sizes too big, we gave them freedom they commit crimes and get locked right back up’ Said Steve giving two more examples of how black people seem to ruin everything for themselves and others.”

According to a disclaimer, Cream BMP is fake.

It also has a profanity-laced disclaimer that reads: “All reports and other information on this page may or may not be 100% accurate. It’s not news, it’s entertainment. All other comments are my personal opinion, but try not to take the [expletive] seriously and come at me with that [expletive], because I will and do sue. I’m just a young [expletive] tryna get rich.”

“People like him who copycat blacks to !! The end !!” one person wrote. “Man that fool is tripping!!” added another.

But another wrote: “Hey guys do you realize that this is a fake article ? The name of the puppeteer is not steve wildfire. His name is steve whitmire. This is the only website that has this article.”

Over the past few days, unrelated Kermit the Frog memes have been going viral on social media websites.