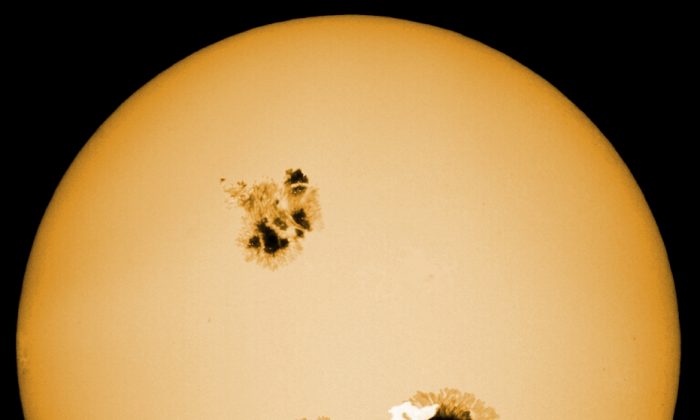 Artistic rendition of a "superflare star". It has large starspots (much larger than those on the Sun) and a superflare (white region) occurs near the starspots. (Hiroyuki Maehara/Kwasan and Hida Observatories, Graduate School of Science, Kyoto University)
Science

Kepler Sheds Light on the Secrets of Superflares

Data from NASA’s Kepler mission has been used by Japanese astronomers to investigate superflares—gigantic explosions that occur on sun-like stars—in a new study published in Nature on May 16.

Superflares are powerful magnetic events much larger than solar flares. They erupt above giant starspots on a variety of stars, but the mechanism behind them is unclear.

To date, the most plausible theory is that they are associated with hot Jupiters—giant gaseous planets orbiting closely that disrupt the stars’ magnetic fields, triggering superflares when the field lines reconnect.

Looking at observations of around 83,000 stars over 120 days, Hiroyuki Maehara and colleagues at Japan’s Kyoto University found 365 superflares on 148 stars. The data suggests superflares are more frequent on stars younger than our sun that are rapidly rotating, but the events on older stars are nearly as strong.

Astrophysicist Bradley Schaefer at Louisiana State University, who authored an accompanying News and Views article, discussed these stellar outbursts in a telephone interview, describing them as “evocative and exciting and startling.”

“The superflares can be millions or even a billion times the largest one ever seen on our sun, and the average one that Maehara’s finding is thousands to millions times larger,” Schaefer said.

In their paper, Maehara et al. noted that there is no evidence of solar superflares from the last 2,000 years, but a flare in 1859—the Carrington event—was estimated to have only one one-thousandth of the energy generated by the average-sized superflare from the Kepler study.

This blast was 6.5 times more powerful than the largest solar flare experienced in recent history, since satellites were launched into space, in 1989. When the resultant magnetic storm hit Earth, it caused electrical arcing in telegraph wires and fires at telegraph stations, and aurorae were seen near tropical latitudes.

The dataset gathered by Maehara’s team implies that hot Jupiters may not cause superflares as none were observed transiting the stars studied.

Though their origins remain elusive, Schaefer said superflares are significant for a number of reasons and are far more than “just being a big challenge to stellar physicists.”

Superflares probably have planets and, if they are associated with hot Jupiters, they could help astronomers to hunt for such planets.

Importantly, such stars could have a catastrophic effect on surrounding celestial bodies when they flare, scorching any nearby planets and life.

“They have implications for where far-future humans can colonize, and for astrobiology,” Schaefer said.

“Superflares might form the most efficient way to make complex organic compounds (like amino acids, all this leading to the start of alien life) as in the Miller-Urey experiment.”

This experiment sought to replicate the hypothetical conditions on primitive Earth when lighting strikes or other high-energy radiation could have transformed simple organic compounds such as methane and carbon dioxide into the ingredients needed for life.