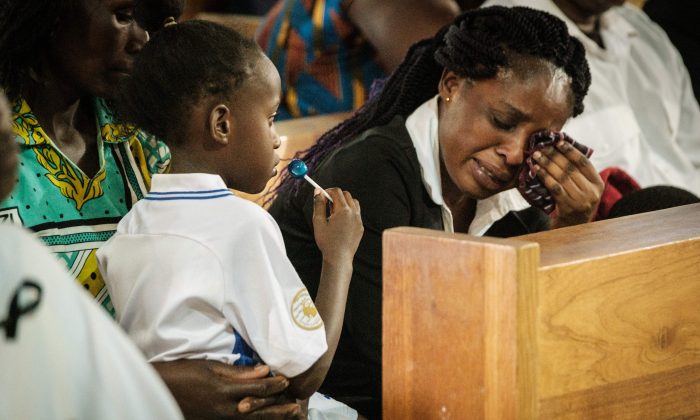 The wife of a staff member at the DusitD2 hotel cries next to one of her children during a memorial service on Jan. 23, 2019, for six staff members of the hotel who were killed during an attack at the Consolata Shrine in Nairobi, Kenya. (Yasuyoshi Chiba/AFP/Getty Images)
Africa

The result was a 12-hour siege that lasted until the next morning, ending with all the terrorists being neutralized by security personnel. At least 21 people died in the attack.

During the attack, Al Shabaab, a Somali terrorist group, spoke to Al Jazeera, claiming responsibility. “We are currently conducting an operation in Nairobi,” the group’s spokesperson said.

One of the reasons why Nairobi is a target for terrorism may be because of its international business presence, some experts say.

Kenya has been a target for terror attacks by Al Shabaab for the past few years. This was initiated, among other reasons, by the entry of the Kenya Defense Forces (KDF) into Somalia in 2011 after the kidnapping of Italian tourists visiting the Kenyan coast.

With the support of the African Union, Kenya entered Somalia to fight Al Shabaab as part of the African Mission in Somalia (AMISOM), even though the terrorist group said they were not responsible for the kidnapping.

AMISOM has carried out the military operation against Al Shabaab to try to neutralize the rebel group that has claimed responsibility for attacks in several East African countries, and the KDF has taken a lead role in the combat.

In retaliation, Al Shabaab launched a series of attacks on Kenyan soil, the most notable ones being at the Westgate Mall in Nairobi in 2013 that claimed over 60 lives and left close to 200 people injured, and another at Garissa University in Garissa, eastern Kenya, two years later in 2015 that claimed the lives of at least 147 students and left close to 80 people injured.

In August 1998, Al Qaeda—an affiliate of Al Shabaab—simultaneously launched a bomb attack at the U.S. embassies in Nairobi and Dar es Salaam, Tanzania, resulting in the killing of 224 civilians—213 in the Nairobi attack and 11 in Dar es Salaam.

The assault at the DusitD2 hotel complex in Nairobi was just one of many attacks Kenya has suffered over the years, costing hundreds of lives.

Nairobi is home to many international companies and organizations—including some United Nations agencies—that run their regional and continental headquarters from the city.

Daniel Heal, the managing director at Control Risks East Africa, a global strategic risk consultancy, said Nairobi is seen as a primary target for terrorist attacks because of the high-profile international businesses hosted by the city. But he warned that there was no easy solution to deal with the problem of terrorism for Kenya.

“There is no one single solution to combat terrorism, because this is a global issue and not Kenya alone is a victim,” Heal said.

Control Risks has its Nairobi office located at 14 Riverside, the same complex that houses the DusitD2 hotel. The company has 18 staff members.

“They were all in the office at the time of the attack and, lucky enough, all of them managed to escape and are safe,” Heal said.

Abullahi Boru, a Horn of Africa security analyst, said in an interview with Al Jazeera that the prime reason Al Shabaab earmarks Nairobi is because of the attention the group would get by targeting the Kenyan capital.

“Nairobi hosts international high-value targets that the group can target to send a signal to Western countries. Countries like Burundi are less strategic, but also you will have to cross multiple borders to reach and hence risky. Al-Shabaab, like many groups of their ilk, is very well attuned to the reality that huge media attention generates more recruitment opportunities,” Boru said.

Many Kenyan politicians, especially those in the opposition, had criticized the government for sending troops to fight Al Shabaab in Somalia. But Heal says withdrawing the troops is not a good solution.

“Terrorism, being a global issue, means that not only Kenya is in the fight against it but also many other countries. There should only be a well-coordinated exchange of intelligence between the security organs to try [to] avoid another attack,” he said.