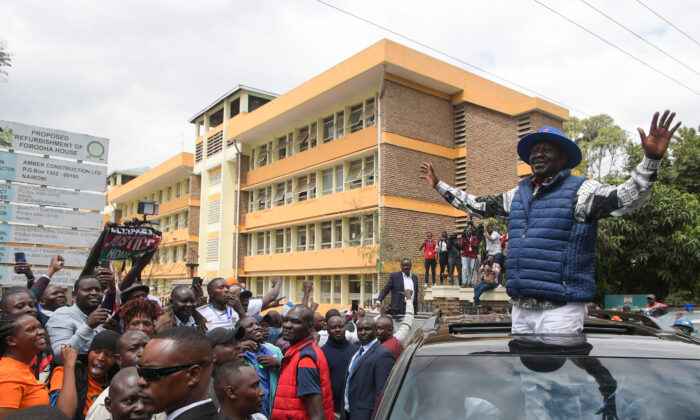 Kenya's Azimio La Umoja Party (One Kenya Coalition Party) presidential candidate Raila Odinga waves to supporters outside the Milimani High Court in Nairobi on Aug. 22, 2022, after filing a petition to the country's top court challenging the result of the Aug. 9, 2022 election that handed victory to his rival William Ruto. (SIMON MAINA/AFP via Getty Images)
Africa

Thirteen days after Kenya’s general election that saw where the country’s deputy president William Ruto declared the winner, his political rival Raila Odinga who came second has gone to the nation’s Supreme Court to challenge the results.

Accompanied by his running mate Martha Karua, their legal team, affiliates and members of the Azimio party (One Kenya Coalition Party), and their supporters, Raila delivered a truck full of boxes with evidence for the elections petition case as they filed it.

“This is a do or die battle for the corruption cartels who have everything to lose should the forces of democracy take over. They are prepared to compromise election systems and security, bribe officials, or even kill in order to find their way to power. We believe this is what happened in this election,” Odinga said.

His argument is that President-elect William Ruto, leader of the United Democratic Alliance party under the Kenya Kwanza (Kenya First) coalition, did not attain the 50 percent plus one vote threshold that is required by the constitution for one to be declared winner in a presidential poll.

He says that this conclusion was arrived at after scientific and verifiable calculations by Dr. Edgar Otumba, who is one of their witnesses, saying that the 50 percent threshold ought to be 7,176,582.766 votes while Ruto was declared the winner having garnered 7,176,141 votes, therefore running short by 441.766 votes.

“Even based on the disparities in the fraudulently manipulated numbers of the voter turnout, the petitioners (Raila and Karua) state that the 9th respondent (Ruto) did not meet the Constitutional threshold of 50 percent plus one of the valid votes cast,” the Azimio petition filed on Monday states in part.

The Supreme Court of Kenya received eight other petitions over the election result from David Ngari, John Kamau, Khelef Khalifa, Moses Kuria, Okiya Omtatah, Reuben Kigame, Youth Advocacy Africa, and Juliah Chege, according to the Kenya Judiciary—some in support of Ruto and others not in support of any winner.

Moses Kuria, who is the Chama Cha Kazi (Labor) party leader, together with the outgoing Mbeere South MP Geoffrey King’ang’i are among petitioners to the Supreme Court seeking the dismissal of the petition challenging the election of Dr. William Ruto as the fifth President.

In his affidavit, Mr. Kuria says they are basing their petition on the events that took place at the national tallying center on the day of the announcement of the presidential results.

“The actions of Mr Odinga and Azimio through their agents amounted to breach of national security as the same caused fear and panic not only amongst the Petitioners and all the persons present at Bomas but also amongst Kenyans across the globe who were keenly following the process on television,” Kuria said through his affidavit.

Okiya Omtatah, a renowned Kenyan human rights activist on his part, argues that neither Raila Odinga nor William Ruto attained the 50 percent threshold.

Omtatah, who is the Busia senator-elect, says that according to his own analysis, none of the candidates got 50 percent plus one vote as required by Article 138(4)(a) of the Constitution because the commission did not include the untallied votes by those who identified manually at the polling stations.

Former presidential candidate Reuben Kigame, who has also filed a petition at the Supreme Court, bases his argument on the rejection to compete by the Independent Electoral and Boundaries Commission (IEBC).

“The Petitioner’s dream together with that of other Independent aspirants in exercising their civil and political rights got into jeopardy due to the unreasonableness and discriminatory actions by the first respondent,” Kigame said.

Kigame further argues that the requirement by the Commission to have them submit ID cards from at least 48,000 registered voters from 24 counties in order for them to be nominated was in violation of the Constitution.

“Throughout the nomination and clearance process, the behavior of [chairman of the IEBC Wafula Wanyonyi] Chebukati came out as capricious, vexatious, and unreasonable, and in absolute disregard of the rule of law, acting in a manner that brings dishonor to the institution he serves and the office he holds,” he said.

Kigame is seeking a nullification of the presidential election.

Meanwhile, the IEBC says that its personnel were attacked in Nairobi as they prepared responses to the presidential election petition.

“Today, Monday, 22nd August, 2022 at around 8:30 p.m., an organized group of goons wielding crude weapons attempted to attack IEBC personnel preparing responses to Presidential election petitions at premises within Nairobi. However, they were repulsed by Security.

“The Commission condemns this act of hooliganism and intimidation, and calls upon the Inspector of Police (IG) to bring to an end this blatant abuse of the Rule of Law,” the commission said.

The Supreme Court, led by Chief Justice Martha Koome has, 14 days from Aug. 22 to hear and determine the case. The judges will give their verdict on Sept. 5.

The seven-judge bench chaired by Chief Justice Koome will hold a pre-trial conference on Wednesday or Thursday to determine how the petitions will be handled. It will also set out the rules of engagement for the proceedings before the hearing and determination of the suit.

Should the judges uphold the election of President-Elect William Ruto, he will be sworn into office on Sept. 13; whereas, a nullification of the election would mean that there will be a repeat election, within 60 days as stipulated by the Constitution, meaning it will be held on Nov. 4.

The result of the 2017 presidential election was nullified by the former Chief Justice David Maraga and his team of judges. At least 37 people were killed in the protests and violence that erupted from the election turmoil.