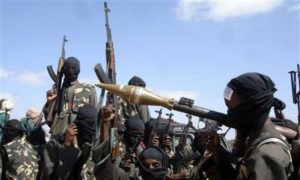 Muslims Refuse to Be Separated From Christians During Terror Attack on Bus in Kenya: Reports
0 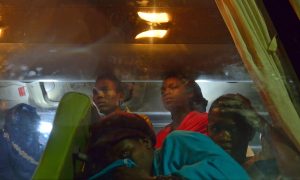 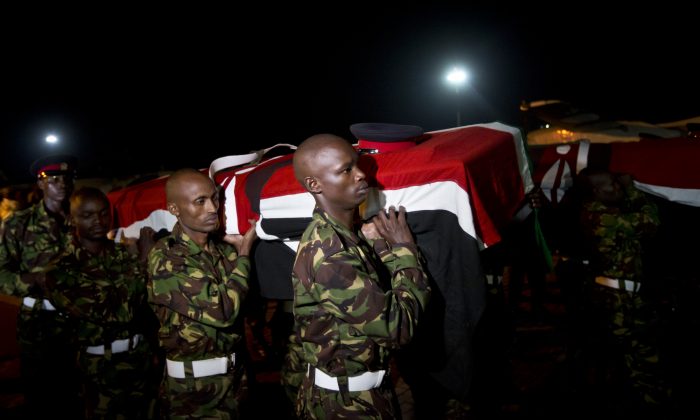 Military pallbearers carry the coffins of four Kenyan soldiers who were killed in Somalia, at a ceremony to receive their bodies which were airlifted to Wilson Airport in Nairobi, Kenya Monday, Jan. 18, 2016. Kenyan officials have not said how many soldiers were killed when Islamic extremist fighters attacked a base for African Union peacekeepers in southwestern Somalia on Friday. (AP Photo/Ben Curtis)
Africa

NAIROBI, Kenya—Kenyans are donating to the family of a Muslim man who was fatally wounded by Islamic extremists while shielding Christians during an attack on a bus.

On Twitter the hashtag HeroSalah has been trending as some Kenyans fundraise for the family of Salah Farah, who died Sunday in a Nairobi hospital. On Tuesday, his body was flown to the northeastern town of Mandera for burial.

“Salah’s children and widow appreciate your support but that’s not enough, his children need to go to school. Walk the talk,” Mohamud Abbas said on Twitter.

Ann McCreath wrote: “Important to support this #HeroSalah is a symbol of the Kenya we want.”

Important to support this. #HeroSalah is a symbol of the Kenya we want. Mpesa details on photo. https://t.co/3TqVGe7zfJ

He was a true hero. He died while protecting innocent Kenyans from terrorists.
— Joseph Bionnet, Kenyan police chief

“Kenyan police chief Joseph Boinnet said: “He was a true hero. He died while protecting innocent Kenyans from terrorists.”

Farah, who was a teacher in the coastal town of Malindi, was among passengers on a bus from Mandera to Nairobi in December when they were attacked by al-Shabab gunmen.

When they were ordered to separate according to religion, he was among the Muslims who refused, to protect the Christians. He was shot in the hip.

Kenyans are praising Farah on social media, saying his example should be emulated in a country facing a growing threat of Islamic extremism as Kenyans with ties to al-Shabab, a Somali group, launch attacks in this country.

In 2011, Kenya’s government deployed peacekeepers to Somalia in part to stop al-Shabab members from crossing the border and launching attacks on Kenyan territory. Al-Shabab opposed the deployment and vowed to wage more attacks.

Last week al-Shabab attacked a camp for Kenyan peacekeepers in southwestern Somalia, killing an unknown number of Kenyan soldiers. Al-Shabab claimed it killed about 100 Kenyans in that attack, but Kenyan officials have refused to provide a death toll.

Muslims Refuse to Be Separated From Christians During Terror Attack on Bus in Kenya: Reports
TOP NEWS