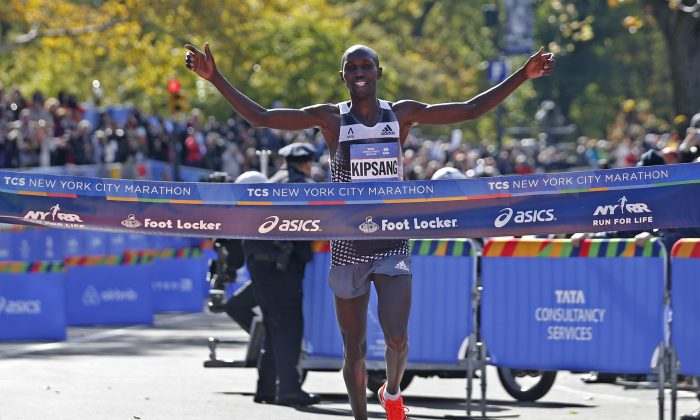 NEW YORK—Wilson Kipsang, a former world-record holder, needed to force himself to slow down.

The Kenyan star had entered his first New York City Marathon to challenge himself on a hilly course with no pacemaker. A windy morning made for quite the test Sunday, and Kipsang proved he can win a strategic race.

“I had to really exercise a lot of patience,” he said.

Kipsang pulled away in the final mile for his third major marathon title in just over 13 months. Mary Keitany also took the lead late in the women’s race for a Kenyan sweep.

Kipsang’s record-setting victories in Berlin and London were on flat courses with the aid of a pacemaker, very different from Sunday, when winds were gusting at more than 30 mph at the start. The contenders adjusted by cautiously sticking to a slow pace.

“It was very tactical,” Kipsang said. “So it was not easy.”

He finished in 2 hours, 10 minutes, 59 seconds — the slowest winning time in New York since 1995, and more than 7 1/2 minutes off the world record he sent just over a year ago in Berlin.

Keitany tried a very different tactic in her last NYC Marathon, surging ahead to a huge early lead in 2011. She was caught that day and had to settle for her second straight third-place finish.

This time, Keitany held back. She and countrywoman Jemima Sumgong entered Central Park side by side, and Sumgong appeared to be pulling away with just over a mile left.

But Keitany had one last burst left and won by 3 seconds, matching the tightest finish in the history of the women’s race. Keitany, a two-time London Marathon champ, hadn’t run a 26.2-mile race since 2012 because of the birth of her second child.

“I worked hard for this opportunity,” she said. “I’m happy because I have a victory today, because I know I’ve been coming to New York two times, and I was in that position. So I’m happy today because it was a good day and I win.”

A record 50,881 runners started the 44th edition of the NYC Marathon. It was so windy that the wheelchair race started at the 3-mile mark because it was too dangerous to roll across the Verrazano-Narrows Bridge.

Keitany and Kipsang each earned $100,000. Kipsang also clinched the $500,000 World Marathon Majors bonus with the victory. He set a course record in winning London in April.

Had Kipsang finished second Sunday, the prize would have gone to occasional training partner Dennis Kimetto, who broke his world record five weeks ago in Berlin.

Kipsang and Ethiopia’s Lelisa Desisa, the 2013 Boston Marathon champ, had separated from the pack when they entered Central Park. Desisa at one point accidentally bumped into Kipsang, who turned to ask what happened considering how much space they had.

Then Kipsang decided this was a good time for his finishing kick. He had been saving his energy exactly for this moment.

“I really trusted myself,” he said.

The reigning Boston Marathon champ, American Meb Keflezighi, took fourth. It was the fourth top-four finish in New York for the 39-year-old Keflezighi, who won in 2009.

Geoffrey Mutai, seeking to become the first man to win three straight NYC Marathons since Alberto Salazar in 1980-82, faded back to sixth.

Bronx resident Buzunesh Deba of Ethiopia was ninth in the women’s race after finishing as the runner-up at the last two NYC Marathons. She was seeking to become the first New Yorker to win the race in 40 years.

Tennis star Caroline Wozniacki, running her first marathon at the end of a grueling season, finished in an impressive 3:26.

Sumgong is still seeking her first major marathon title; she was also second in Boston in 2012 and in Chicago in 2013.

She was originally supposed to run Chicago again in mid-October but pulled out because of a hamstring problem. Instead, she decided to make her NYC Marathon debut, joining the field after defending champion and training partner Priscah Jeptoo withdrew because of a leg injury.

“In the closing miles, my target was to win,” Sumgong said, “but it was Mary’s day.”