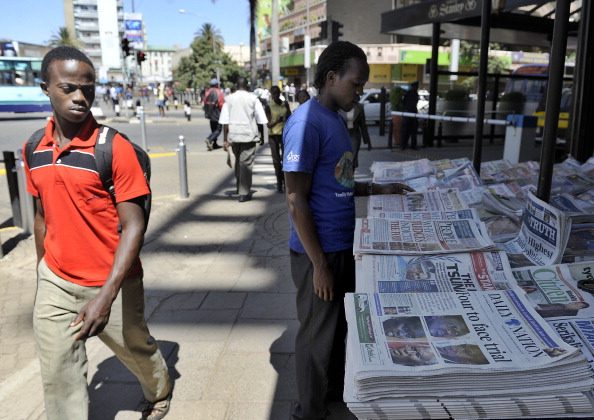 A man walks past a news stand displaying the day's papers carrying in the headlines photos of four Kenyans to face charges of crimes against humanity before the International Criminal Court, in the Kenyan capital Nairobi on January 24 2012. (Tony Karumba/AFP/Getty Images)
Africa

Two top Kenyan government officials on Thursday said they will resign after the International Criminal Court revealed earlier this week that it would prosecute them over war crimes committed in post-election violence several years ago.

The finance minister of Kenya, Uhuru Kenyatta, and Francis Muthaura, the head of the country’s civil service agency, will step down from their positions, according to Kenya-based Capital FM News.

“The president has accepted the decision by Kenyatta to step aside as the Minister for Finance. However, he will retain the position of Deputy Prime Minister in accordance with the Constitution,” according to a statement from President Mwai Kibaki, according the radio station.

In another statement from Kibaki’s office, the government “also accepted the decision by Francis Muthaura to step aside,” according to The Nation newspaper.

The ICC charged the two men as well as two other prominent Kenyans with involvement in crimes against humanity committed by government forces in the 2007-2008 violence. The violence left 1,300 people dead and hundreds of thousands displaced.

Responding to the ICC’s charges, Attorney General Githu Muigai said later that the two officials would not be asked to step down until an appeal is launched, according to Capital FM. However, Mutula Kilonzo, the Justice and Constitutional Affairs Minister, said that the two needed to step down for their trial.