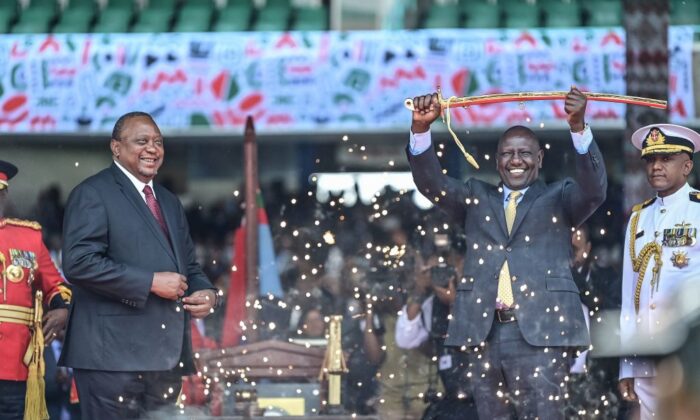 Kenyan President William Ruto was inaugurated in Nairobi on Sept. 13, days after the country’s Supreme Court upheld his election win, in a ceremony attended by more than 20 heads of state and government dignitaries.

Ruto’s inauguration was a smooth transition of power, with outgoing President Uhuru Kenyatta handing over the instruments of power to him during the ceremony held at the Moi International Sports Center, Kasarani.

Kenya’s neighboring countries, including Uganda, Tanzania, Ethiopia, South Sudan, Rwanda, the Democratic Republic of Congo, Burundi, and others, were all well-represented.

President Yoweri Museveni of Uganda said in his speech that even though he hadn’t read any of the Kenyan political parties’ manifestos, he was sure that Ruto would deliver.

“I have not read Kenya Kwanza’s manifesto or that of Azimio, but I know Ruto. … I have met him a number of times in Uganda, and I know he likes ideas and frank talking. In order for EAC [East African Community] countries to catch up with the U.S., we need to look at the issue of the regional market, because when you produce, the more people that buy from you and the better for business and job creation,” Museveni said.

He noted that, in his experience, prosperity is achieved through wealth creation.

“According to my experience of 60 years, I would advise Africans to know that prosperity comes from wealth creation,” Museveni said.

His Burundi counterpart and chairperson of the EAC, Evariste Ndayishimiye, said the past election was a sign that Kenya had won.

“Kenya has won, and your benefits are the pride of the East Africa Community. You have overcome the devil of war. Much congratulations to you!” Ndayishimiye said in his speech.

Thousands of Kenyan citizens streamed into the 60,000-capacity Kasarani Stadium to witness Ruto’s inauguration. The gates to the stadium were opened at 4 a.m., and by 5 a.m., it was already full, with the Kenya Police Service urging Kenyans to follow the proceedings from home. Thousands of others watched the event from designated posts with large screens outside the stadium, while millions keenly followed from their TVs in the comfort of their homes.

Ruto is inheriting a “dilapidated economy,” according to his deputy president, Rigathi Gachagua.

“The truth of the matter is that we have inherited a dilapidated economy that is almost facing an economic shutdown. We have 10 billion [in] public debt; 6 million Kenyans have no employment. We have a demoralized public service,” Gachagua said. “We have talked to the treasury, and the coffers are empty. We will have to start from scratch.”

He assured the people of Kenya that they were free and were allowed to criticize the government without fear.

“I want to tell the people of Kenya that you are finally free. You don’t have to talk with each other through WhatsApp for fear of being recorded and persecuted by state agencies,” Gachagua said.

In his speech, Ruto promised Kenyans a myriad of things, taking time on his promises during his campaign.

He promised to return businesses to the port of Mombasa, which became a huge dent in Kenyatta’s administration after he moved the port to a dry port in Naivasha, Nakuru County.

Ruto also announced, among other things, new fertilizer prices to enable food production by farmers and appointed six judges that were rejected by his predecessor.

“To further demonstrate my commitment to the independence of the Judiciary, this afternoon, I will appoint the six judges already nominated for appointment to the Court of Appeal three years ago by the Judicial Service Commission, and tomorrow, I shall preside over their swearing-in ceremony so that they can get on with the business of serving the people,” he said.

However, the inauguration ceremony wasn’t attended by Ruto’s political rival and competitor, Raila Odinga, who said he was traveling out of the country on more important business.

“This evening, I received a letter and a telephone call from H.E Dr. William Ruto inviting me to his inauguration set for tomorrow, Sept. 13, 2022. I regret however that I will not be available for the inauguration because I am out of the country and I also have other serious concerns,” Odinga said.

“I believe that the Independent Electoral and Boundaries Commission, the body in charge of our elections, did not conduct a free and fair election.”

However, he said he’ll announce his next steps to ensure democracy once he gets back to the country.

“For these reasons, the outcome of the election remains indeterminate. Once I return to the country, I will, jointly with Azimio la Umoja One Kenya Coalition Party leaders, announce our next steps as we seek to deepen and strengthen our democracy,” Odinga said.