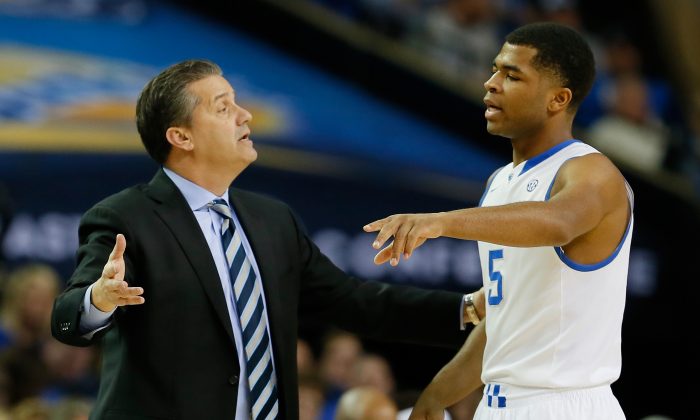 Head coach John Calipari of the Kentucky Wildcats converses with Andrew Harrison #5 against the LSU Tigers during the quarterfinals of the SEC Men's Basketball Tournament at Georgia Dome on March 14, 2014 in Atlanta. (Kevin C. Cox/Getty Images)
College Sports

The Georgia Bulldogs are taking on the Kentucky Wildcats in the Southeastern Conference semifinals on Saturday.

The teams face off at the Georgia Dome in Atlanta with tip-off scheduled for 3:25 p.m. ET.

The game will be live streamed on ABC.

Broadcast on ESPN, the tournament championship game is scheduled for Sunday at 3:15 p.m. ET.

See an argument on why to dump conference tournaments by AP national writer Paul Newberry below.

ATLANTA—Looking around at all the empty seats at the Georgia Dome, one can’t help but wonder if conference tournaments have outlived their usefulness.

Sure, the Southeastern Conference’s postseason shindig is a bit of an anomaly — a tournament being played in a lame-duck city, at a domed football stadium with far more capacity than is needed, after a ho-hum year where no team stood out except for No. 1 Florida.

But given the massive conference shake-ups of the past few years, which have pushed together schools from far-flung places and broken up longstanding rivalries in the quest for the almighty football dollar, it’s time to reconsider the way we use this time of year in college hoops.

Early round “crowds” in Atlanta amounted to family and friends. And dare I say, do we even need the Atlantic Coast Conference tournament, the granddaddy of these events. With the ACC now bloated to 15 teams, empty seats during its opening round at Greensboro were covered by a curtain.

How about in place of the conference tournaments, let’s expand the NCAA field from 68 to 96 teams, with the 32-game opening round played out on this very weekend. Instead of focusing on a few bubble teams that are looking to bolster their credentials for the selection committee, every contest would determine whose season is over and which teams get to play on.

Plus, the top 32 teams — more specifically, the top eight seeds in each regional — would earn a well-deserved bye to the second weekend, giving them time to rest up and get in some extra practice sessions.

Granted, an expanded NCAA tournament would dilute the quality of play just a bit, but not all that much given there are now more than 300 Division I schools. And, we regret to say, eliminating the conference tournaments would wipe out those handful of feel-good stories we have each year, where some school comes out of nowhere to claim a spot in the national title race.

But there will always be thrilling moments.

These days, there are just not many people showing up to see them.

In Atlanta, not even the arrival of the country’s top-ranked team did much to spur interest at theSEC tournament Friday. The crowd was announced at 15,273, but there weren’t nearly that many people actually in the building for Florida’s 72-49 victory over Missouri.

Attendance figures to pick up next year, when the SEC shifts to its new semi-permanent home in Nashville. But rest assured, that shine will wear off, too, while the good folks of Tennessee are hosting this event during nine of the next 11 years. There are simply too many teams playing too many meaningless games, now that the conference has grown to 14 schools and the tournament stretches over five days instead of four.

Ditto for the ACC tournament, which was once one of the hardest tickets to land in any sport.

With Syracuse, Pittsburgh and Notre Dame joining the ACC, there was a fifth day of games for the first time in the tournament’s 61-year history. Not surprisingly, on an opening day which featured the six lowest-seeded teams, there were plenty of empty seats. The league even put up a curtain around the upper deck of the Greensboro Coliseum along three of the four sides, in addition to bringing in former “American Idol” winner Scotty McCreery for a brief concert between games, all in hopes of boosting attendance.

The curtain industry is doing a banner business this week, because the upper deck at the Barclays Center in Brooklyn was also covered for the Atlantic 10 tournament. But the league insisted that empty seats were a small price to pay for the league getting some exposure in the Big Apple.

“If you have an opportunity to win in New York, I think that’s a great thing,” said Jim Crews, the coach of No. 18 Saint Louis, which was upset by St. Bonaventure on Friday in the A-10 quarterfinals. “Kids enjoy coming to New York. It’s a special place.”

Saint Louis knows it’s going to the NCAAs, no matter what happened in its tournament.

That’s not necessarily the case for teams such as Vermont, High Point, Green Bay, Iona, Robert Morris, Belmont, Boston University, Davidson and Southern University, all of which won their conference titles but were knocked off in their league tournaments. Stephen F. Austin may have gone 18-0 in the Southland Conference, but it still needed to win its tournament. So did Georgia State, despite going 17-1 in the Sun Belt.

Time to try something different.