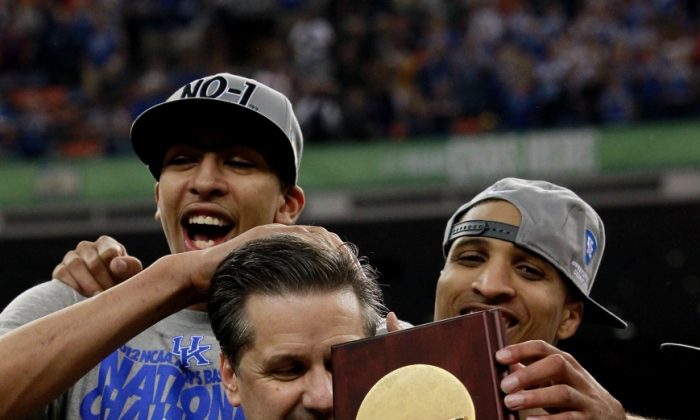 The Kentucky Wildcats jumped out to an 18-point first half lead and held off a furious Kansas rally to win the 2012 National Championship 67–59 for the storied school’s eighth title.

Kentucky freshman center Anthony Davis hit just one of his 10 shot attempts but was named Most Outstanding Player after grabbing 16 rebounds, blocking 6 shots and intimidating Kansas into numerous misses with his long arms in the lane.

As was the script for most of Kansas’ games in this tournament the Jayhawks fell behind early, trailing 41–23 with just over a minute left in the first half. The ensuing 14-point halftime deficit marked the fourth time in six tournament games they were behind at the break.

Kentucky, after an impressive first half, was a bit passive in the final 20 minutes as Kansas started to chip away at the lead. After Kansas guard Tyshawn Taylor’s layup pulled the Jayhawks to within 10 at the 11:52 mark, Kentucky guard Doron Lamb hit a pair of back-breaking three-pointers to push the lead back to 16 points with just over 10 minutes left.

Lamb finished with a game-high 22 points while Taylor led Kansas with 19 points in his final game.

The latter three-pointer by Lamb would be the last Wildcat field goal for nearly five minutes though, and when Kansas forward Thomas Robinson hit a pair of free throws after the final TV timeout with 3:52 remaining the lead was down to 59–52—the closest it had been since early in the first half.

Robinson, the Big 12 Player of the Year, finished with 18 points and 17 rebounds but hit just 6 of his 17 shots as he was clearly bothered by the low-post presence of Anthony Davis.

Kansas would close to within 62–57 with 97 seconds remaining and had several opportunities in the final minute to make the game even closer but a Tyshawn Taylor layup attempt was blocked by the taller Michael Kidd-Gilchrist. Later, an Elijah Johnson three-point attempt was foiled by the presence of Davis, again, and the Wildcats hung on for the title.