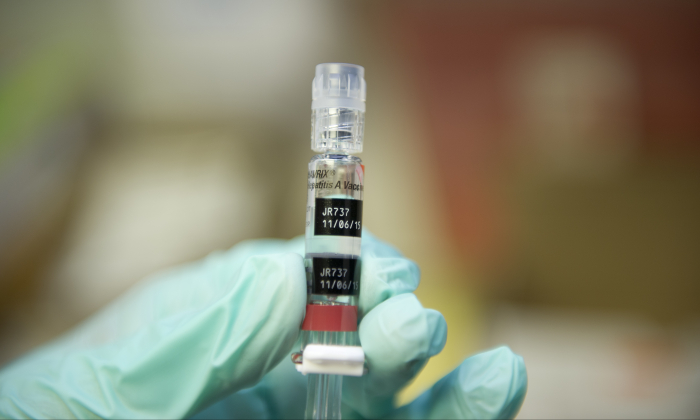 A nurse loads a syringe with a vaccine against hepatitis at a free immunization clinic for students before the start of the school year, in Lynwood, California August, 27, 2013. (Robyn Beck/AFP/Getty Images)
US

FRANKFORT, Ky.—More than two dozen Catholic school students and their parents have lost their initial appeal in challenging a Kentucky health department’s efforts to control a chickenpox outbreak they claim infringed on their religious beliefs.

A three-judge panel of the Kentucky Court of Appeals sided with a trial court judge who ruled in April that the Northern Kentucky Health Department acted within its authority.

The health agency canceled extracurricular activities and later imposed a temporary ban on school attendance for unvaccinated students as the chickenpox outbreak spread.

“The commonwealth has a compelling interest in taking limited and temporary steps to control an outbreak of a vaccine-preventable disease,” the appeals court panel said on June 28.

The ruling applied to the trial judge’s refusal to impose a temporary injunction on behalf of the students attending Our Lady of the Sacred Heart and Assumption Academy who—along with their parents—challenged the regional health department’s actions.

Attorney Christopher Wiest, who represents the students and parents, said July 1 he will appeal to the Kentucky Supreme Court. The appeals court ruling was “extraordinarily deferential to the trial court,” he said, adding that the health department “targeted our clients for their religious beliefs and … retaliated against protected First Amendment speech.”

The health department’s attorney, Jeff Mando, said July 1 that the ruling “underscored the authority of local health departments to take reasonable measures to prevent the spread of infectious disease and protect public health.” The appeals court “recognized that this case was never really about the exercise of religious freedom. It was about preventing and controlling the spread of a contagious disease,” he said.

The students have cited religious objections to the chickenpox vaccine, claiming the original cells from which the vaccine was developed came from aborted fetus cells decades ago.

More than 80 percent of students at the two schools aren’t vaccinated against chickenpox. Their parents signed documents exercising their right to a religious exemption from vaccination.

When a chickenpox outbreak occurred earlier this year at the schools, the health department initially ordered that extracurricular activities be temporarily canceled. In March, as the illness spread, the health agency imposed the temporary ban on school attendance for unvaccinated students until 21 days after the onset of a rash for the last ill student or staff member.

The appeals court said there was no evidence that the health department required that parents have their children vaccinated.

The legal fight began when a student wasn’t allowed to play basketball because he wasn’t vaccinated for chickenpox. The other students and their parents joined the lawsuit.

Chickenpox is a contagious disease that causes a blister-like rash, itching, tiredness, and fever, according to the U.S. Centers for Disease Control and Prevention. It recommends two doses of chickenpox vaccine for children, adolescents, and adults who have never had chickenpox and were never vaccinated, according to its website.