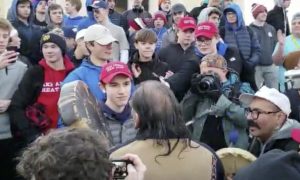 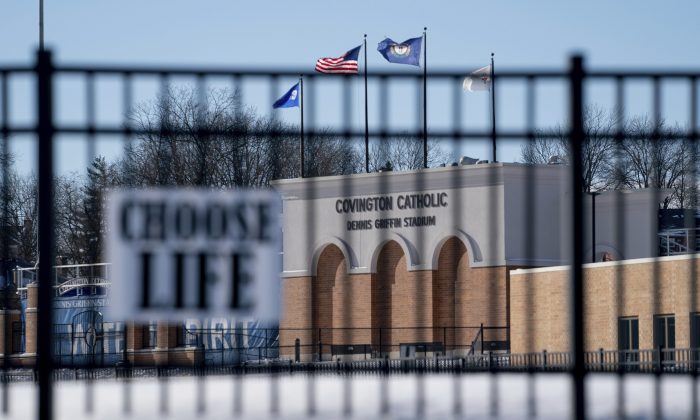 Covington Catholic High School, now known nationwide after its students were involved in an encounter with Native American and Black Hebrew activists on Jan. 18 in Washington, closed for safety reasons on Jan. 22.

Due to the federal Martin Luther King Jr. holiday on Monday, Tuesday would have been the first day back for students following the encounter.

Waiting for buses to ferry them back to Kentucky on Friday, over 100 Covington students and chaperones were accosted by the group of black activists, who hurled obscenities at them. Then, a group of Native Americans approached the students and chanted loudly while one member told them to “go back to Europe.”

The resulting faceoff, which saw one student stand and smile as the Native American leader drummed in his face, went viral nationwide as media outlets slammed the students for a range of allegations, including racism.

Students later said they were confused about the aims of the activists and shaken after the overwhelming amount of negative coverage that seemed motivated by anti-President Donald Trump animus. Most of the students were wearing “Make America Great Again” hats, signature gear for Trump supporters.

“I never interacted with this protester. I did not speak to him. I did not make any hand gestures or other aggressive moves. To be honest, I was startled and confused as to why he had approached me. We had already been yelled at by another group of protesters, and when the second group approached I was worried that a situation was getting out of control where adults were attempting to provoke teenagers,” Nick Sandmann, the student who stood in front of Nathan Phillips, the Native American activist, said in a statement.

“I believed that by remaining motionless and calm, I was helping to diffuse the situation. I realized everyone had cameras and that perhaps a group of adults was trying to provoke a group of teenagers into a larger conflict. I said a silent prayer that the situation would not get out of hand,” he continued.

Phillips on Monday slammed Sandmann’s statement and said he hoped students were expelled from the school.

In a letter to parents and students, Covington Principal Robert Rowe said the decision to close the school was made “in order to ensure the safety of our students, faculty, and staff.”

Rowe said the decision was made after meeting with local authorities, reported Fox 19, which obtained the letter.

‘“All activities on campus will be canceled for the entire day and evening. Students, parents, faculty, and staff are not to be on campus for any reason. Please continue to keep the Covington Catholic Community in your prayers,” Rowe added.

Protesters planned a protest outside the Diocese of Covington on Tuesday morning after initially planning the event outside the school. A number of activists, analysts, and others encouraged violence against the students in the aftermath of the encounter, including a Disney producer who said any kids wearing so-called “MAGA” hats should be killed.

Other schools in the area were closed or had delayed openings on Tuesday due to low temperatures and Covington originally announced a delay.

Nick Sandmann and the students of Covington have become symbols of Fake News and how evil it can be. They have captivated the attention of the world, and I know they will use it for the good – maybe even to bring people together. It started off unpleasant, but can end in a dream!

“Looking like Nick Sandman & Covington Catholic students were treated unfairly with early judgments proving out to be false—smeared by media. Not good, but making big comeback!” Trump said late Jan. 21.

He then quoted Fox News host Tucker Carlson, who said during his show on Monday night, “New footage shows that media was wrong about teen’s encounter with Native American.”

The next morning, he added: “Nick Sandmann and the students of Covington have become symbols of Fake News and how evil it can be. They have captivated the attention of the world, and I know they will use it for the good—maybe even to bring people together. It started off unpleasant, but can end in a dream!”