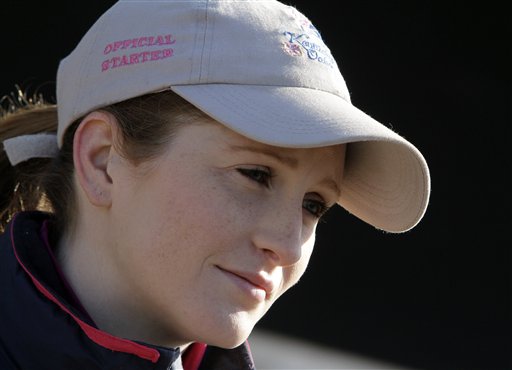 The Kentucky Oaks horse race is set for May 2.

Live streaming will be available through NBC Sports Extra.

There are 13 fillies in the field, including the favorite Untapable.

See the complete field below (post position, horse, jockey, odds) and a preview from the Associated Press below that.

An outrider looks over the track before the 140th running of the Kentucky Oaks horse race at Churchill Downs Friday, May 2, 2014, in Louisville, Ky. (AP Photo/Charlie Riedel)

LOUISVILLE, Ky.—Untapable should feel right at home when she takes to the track for the $1 million Kentucky Oaks.

After all, she’s undefeated in two previous races at Churchill Downs, and she’s the early 4-5 favorite for Friday’s 140th running of the nation’s richest race for 3-year-old fillies.

Untapable has won both her starts this year by a combined 17¼ lengths. She’ll take on 12 rivals in the 1 1/8-mile race.

The filly will be ridden by Rosie Napravnik, who is seeking her second Oaks win. She became the first female jockey to win the Kentucky Derby eve race in 2012 aboard Believe You Can.

“It was so special,” Napravnik said Thursday. “It was my all-time favorite moment of my career. I kind of feel like it’s my race. I’m really excited to ride a filly I have so much confidence in.”

Untapable’s trainer, Steve Asmussen, has an Oaks win on his resume, too, saddling Summerly to victory in 2005.

He is under investigation for alleged abuse of horses by Kentucky and New York racing officials after People for the Ethical Treatment of Animals secretly videotaped scenes and conversations in his barn.

Untapable drew the No. 13 post on the far outside.

Fashion Plate is the early 6-1 second choice in the wagering. She’s won her last three starts, including two at Santa Anita with 51-year-old jockey Gary Stevens aboard.

Three-time Oaks winner Todd Pletcher will saddle My Miss Sophia and Got Lucky in an attempt to become the first trainer since D. Wayne Lukas to win the race in consecutive years. He won last year with Princess of Sylmar. Lukas won in 1989-90. He used to employ Pletcher as an assistant.

My Miss Sophia is 3-0 in her career, most recently winning the Gazelle at Aqueduct in her stakes debut. Got Lucky finished second in the Gazelle in her last start.

Bob Baffert, a two-time Oaks winner, will send out Ria Antonia, who will be ridden by Hall of Famer Mike Smith. They were set to team up in Saturday’s Kentucky Derby with early second choice Hoppertunity, but the colt was scratched Thursday with a foot problem.

Dallas Stewart will try to win his second Oaks. He trained and partly owned 2006 winner Lemons Forever, and he will send that winner’s daughter, Unbridled Forever, to the post on Friday.

Also chasing a second Oaks victory is Calvin Borel, who was aboard Rachel Alexandra in her 20¼-length victory in 2009. This time he rides Sugar Shock.