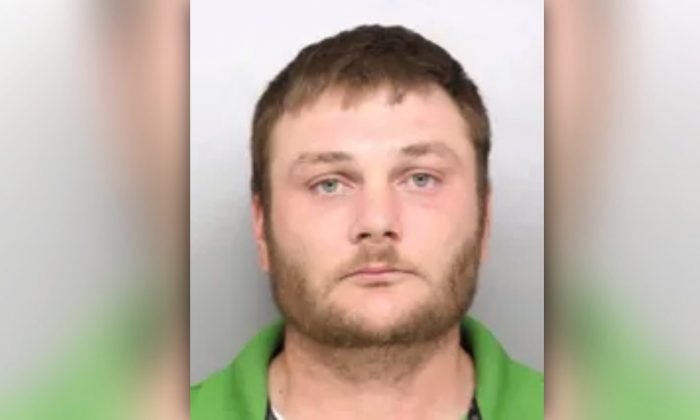 Kentucky Man Arrested After Fight Outside Trump Rally in Cincinnati

A 29-year-old Kentucky man has been charged with assault after a 61-year-old protester was punched outside a rally for President Donald Trump, reports said.

Dallas Frazier was arrested on Thursday, Aug. 1, in the 300 block of Broadway Street in Cincinnati, according to Lt. Steve Saunders with the Cincinnati Police Department, WLWT5 reported.

A video posted to Facebook shows the altercation outside of U.S. Bank Arena ahead of Trump’s Keep America Great political rally.

Footage captured by witness Scott Fantozzi shows a man identified by police as Frazier get out of a red pickup truck and confront Cincinnati resident Mike Alter, WCPO Channel 9 reported. A split second after Frazier drops his baseball cap to the ground, fists start flying.

“I said something to him and he jumps out and wants to start fighting,” protester Mike Alter told WLWT5. “Jumps out and starts whaling on me.”

According to court documents reported on by Cincinnati.com, after jumping out of the truck, Frazier said “you want some” and then hit the victim multiple times.

Moments later the police intervened and took Frazier into custody. Video shows officers leading the suspect away from the scene. Another occupant of the truck, who appeared to try and calm the situation, was also seen being led away by police.

Alter said he sought medical attention at a hospital after the violent confrontation.

Frazier was arrested on a misdemeanor assault charge, Fox19 reported, and was held overnight without bond.

What Led Up to the Fight?

President Trump and Vice President Mike Pence addressed a crowd of thousands at the U.S. Bank Arena Thursday, while demonstrators held protests a few blocks away outside.

The president criticized the homicide rates in the Democrat-led cities of Baltimore and Chicago and said his opponents would rather throw their weight behind illegal immigrants than protect members of their own communities.

“The rage-filled Democratic party is trying to tear America apart,” he said. “No one has paid a higher price for the far left’s destructive agenda than Americans living in our inner cities. They have paid a dear price—you see what’s happening. We spend billions and billions and billions for years and years. And it’s stolen money and it’s wasted money, and it’s a shame.”

Trump also talked about his trade policies with China after announcing earlier in the day he would impose a 10 percent tariff on $300 billion in Chinese imports.

“We’re stopping the theft of American jobs,” Trump said, later adding, “Until such time as there is a deal, we will be taxing the hell out of China.”

Alter told WCPO that when the red pickup with Frazier inside drove by, a shouting match ensued.

“These guys pulled up in the pickup truck, everyone was yelling back and forth at them,” Alter told WCPO. Alter said he engaged Frazier verbally, claiming that he “was more questioning him” than trying to provoke him when he said he told Frazier, “Like really you want to fight?”

Lt. Saunders told WCPO he was not aware of any other fights or rally-related incidents that needed police intervention.

According to Epoch Times reporter Venus Upadhayaya, a retired man waited outside the venue for Trump’s Cincinnati rally to fulfill his 32-year-old wish.

A Trump supporter, Tim Dever read “Trump: The Art of the Deal” when he was studying economics in college.

“I’m hoping to get a book autographed tonight. Thirty-two years ago when I was in college I was failing economics and I had the opportunity to do a book report to pass the class.

“So I bought the book ‘Trump: The Art of the Deal’ and I ended up getting a B in the economics class. So I graduated from college in ’87, shortly after the book came out,” Dever told NTD, an affiliate of The Epoch Times.

Thursday’s rally was President Trump’s seventh visit to the Greater Cincinnati region since he announced his candidacy for the White House in 2015.

Trump, whose upcoming election was described by Vice President Pence as a choice between “freedom and socialism,” will focus on battleground states and exploit the ideological divides in the Democratic Party.

BIG RALLY tonight in Cincinnati, Ohio. See you there! P.S. Our Country is doing GREAT!

“The people on the stage tonight, and last, were not those that will either Make America Great Again or Keep America Great! Our Country now is breaking records in almost every category, from Stock Market to Military to Unemployment. We have prosperity & success like never before,” Trump wrote on Twitter soon after Wednesday night’s debate.

Dever said his retirement pension has tripled since Trump became president and has his own arguments to support Trump.

“The big cry of the Democrats is he’s done nothing to help the poor. But I’m actually poor and he’s done great by me. So I’m hoping for another four years,” said Dever.

WLWT5 spoke to other Trump supporters inside the venue.

“Jobs, the economy’s up. He’s great for the military. The unemployment is down. I don’t see anything bad about him. I really don’t,” said Penny Hasenmeier from Columbus, Ohio, according to WLWT5.

“I support him 100 percent,” said Billy Murphy of Owensboro. “Build the wall.”