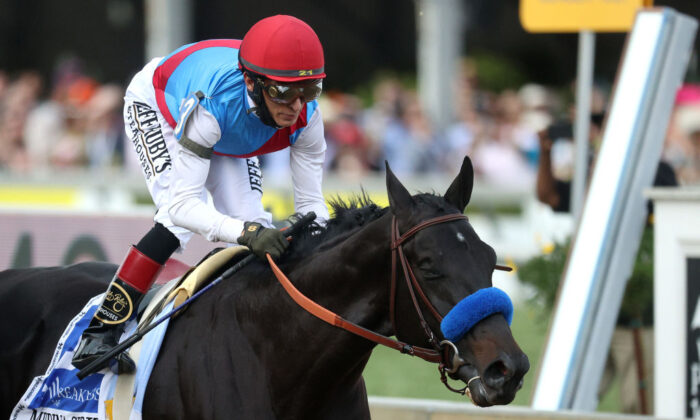 LOS ANGELES—Medina Spirit, the Kentucky Derby-winning horse that failed a drug test afterward and cast a cloud over the victory, died Dec. 6 during a workout at Santa Anita race track.

“Following the completion of a routine morning workout, Medina Spirit collapsed on the track at Santa Anita Park and died suddenly of a probable cardiac event according to the on-site veterinary team who attended to him,” track officials said in a statement.

“The Santa Anita Park veterinary team, led by Senior Veterinarian Dr. Laurie Bohannon, immediately took blood, hair and urine samples from Medina Spirit. Those samples were sent to the California Horse Racing Board. A full necropsy, as per protocol in California, run by the [University of California–Davis] School of Veterinary Medicine will be performed to try and ascertain the exact cause of this sudden death. The results of the necropsy and toxicology studies will be released by the California Horse Racing Board as part of their inquiry into the cause of this unfortunate event.”

In a separate statement, California Horse Racing Board (CHRB) officials said the 3-year-old colt collapsed near the finish line while completing a workout on the main track at Santa Anita.

“He died immediately,” according to the CHRB. “Cause of death cannot be determined until the necropsy and toxicology tests have been completed.”

Jeff Blea, equine medical director for the CHRB, told Thoroughbred Daily News that he saw a video of the horse’s workout, and Medina Spirit appeared to labor toward the end.

“He looked like he was struggling the last part, and the rider was pulling him up,” Blea told Thoroughbred Daily News.

Blea said the horse collapsed just after reaching the wire at the end of his workout, and by the time the track veterinarian reached Medina Spirit, the colt was already dead.

“Sudden death is the cause of the death,” Blea told the publication, speculating that “oftentimes, these are cardiovascular.”

The horse, trained by Bob Baffert, won the Kentucky Derby in May but later tested positive for the steroid betamethasone, leading to challenges to the validity of the victory. Officials at Churchill Downs announced that Medina Spirit would be disqualified if the test was confirmed, and it suspended Baffert for two years.

Baffert and his attorney have insisted that the positive test was the result of a topical ointment known as Otomax being used to treat a skin condition, not an injection aimed at enhancing the horse’s performance in the race.

Through his attorney, Baffert issued a statement to TDN saying, “It is with great sadness that I am reporting Medina Spirit passed away today from a heart attack at Santa Anita following a workout. My entire barn is devastated by this news. Medina Spirit was a great champion, a member of our family who was loved by all, and we are deeply mourning his loss. I will always cherish the proud and personal memories of Medina Spirit and his tremendous spirit. Our most sincere condolences go out to (owner) Mr. Amr Zedan and the entire Zedan Racing Stables family. They are in our thoughts and prayers as we go through this difficult time.”