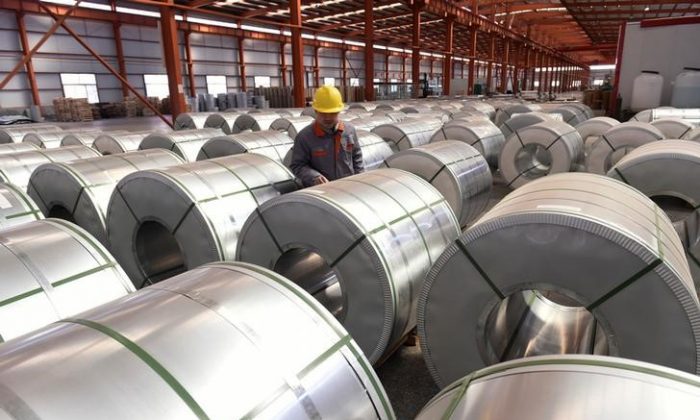 A worker checks aluminum rolls at a warehouse inside an industrial park in Binzhou, Shandong Province, China, on April 7, 2018. (China Daily via Reuters)
Companies

Century Aluminum, the largest producer of primary aluminum in the United States, laid off hundreds of workers due to business inactivity at one of its plants, a decision that CEO Jesse Gary attributed to rising energy prices.

Layoffs at Century’s Hawesville plant in Kentucky were announced by the company in a June 22 statement. The plant will remain idle for nine to 12 months, by which time the firm expects energy prices to return to “more normalized levels.” The company employs more than 600 workers at the plant, most of whom received the temporary layoff notice on June 22.

During an earnings call on Aug. 9, Gary called the curtailment of Hawesville operations an “unfortunate decision.” The financial economics of running the smelter had become “untenable” following high energy prices, which had forced the company to shut down the plant, he said.

The company is working with local, state, and federal resources to help affected employees find new employment, Gary said during the earnings call. Century is offering affected employees jobs at the company’s other U.S. locations where possible, he added.

In the statement, Gary said that “the power cost required to run our Hawesville, KY, facility has more than tripled the historical average in a very short period. Unfortunately, this makes it necessary to temporarily curtail operations.”

Following Century Aluminum’s announcement in June, Alcoa Corp. declared on July 1 that it was curtailing one of the three operating smelting lines at its Warrick Operations facility in Indiana due to “operational challenges.”

The Warrick Operations smelter was shuttered in 2016 as cheap Chinese aluminum flooded the U.S. market during the Obama administration. But under the Trump administration, it restarted operations in 2017.

In May, a group of factories from the Midwest informed federal energy regulators that some of them were on the brink of closure for the summer or even longer due to “unjust and unreasonable” electricity costs, according to Bloomberg. By June, natural gas prices were already triple than what they cost a year ago.

According to Katie Coleman, an attorney for the Texas Association of Manufacturers, her clients usually have to bear three costs that tend to vary in proportion over time: electricity, labor, and taxes.

“But right now, electricity is an even larger factor than normal,” she said.