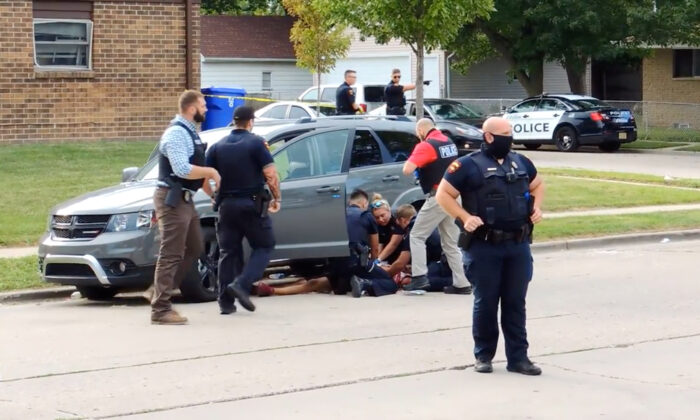 In this screen grab obtained from a social media video, Jacob Blake lies on the street after he got shot by a police officer after resisting arrest in Kenosha, Wisc., on Aug. 23, 2020. (Incident Response/via Rreuters)
Judiciary

Jacob Blake Jr. has been denied damage claims by the Kenosha City Council in Wisconsin.

Blake petitioned for lost wages, medical expenses, and “pain and suffering and disfigurement” after being paralyzed.

State law capped the claim at $50,000, but his lawyers presented an itemization named “special damages” at a figure of almost $777,000 due to his injuries, the Milwaukee Journal Sentinel reported.

The request was rejected 17-0 with no deliberation, according to The Kenosha News.

On Thursday, City Administrator John Morrissey said that the filing was a formality that allowed Blake to sue for injuries within the state law’s limitations.

“The federal civil rights suit is being pursued, and the potential state claim, essentially the same cause of action with caps on damages, would be superfluous of it. We are considering options,” said Blake’s legal team, which filed an accusation of excessive force.

Blake was shot on Aug. 23, 2020, as three officers tried to arrest him on an outstanding warrant.

Officers were responding to a 911 call from a woman who said her boyfriend was at her house but was not supposed to be there.

In January, a prosecutor declined to file charges against Rusten Sheskey, the officer who shot Blake.

Rusten Sheskey told investigators he fired his weapon at Blake, who possessed a knife, because he was trying to protect his life and prevent Blake from kidnapping the child, who was in the backseat of the SUV, according to his attorney.

Sheskey also stated that he was concerned about his safety.

A Kenosha city official said that the destruction to city-owned property caused by rioters following the shooting of Blake had caused nearly $2 million in damage.

More than 250 people were arrested in the following week.

Maoist activists from the Freedom Road Socialist Organization were linked to the riots.