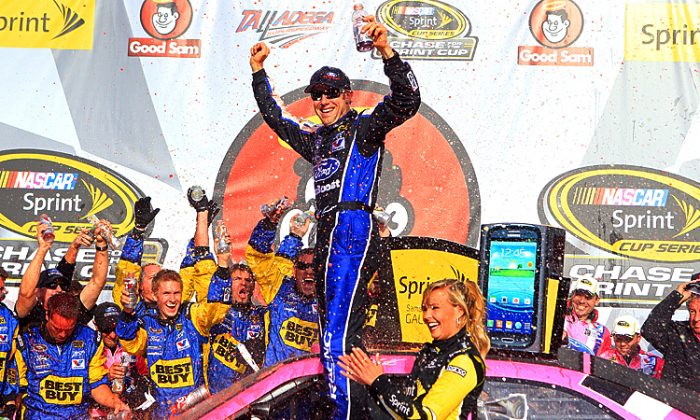 Tony Stewart, driver of the #14 Mobil 1/Office Depot Chevrolet, flips in the air after touching off an enormous multi-car accident on the last lap at Talladega. (Todd Warshaw/Getty Images for NASCAR)
Motorsports

NASCAR’s restrictor-plate races are characterized by a single phrase: “The Big One,” the huge, high-speed wrecks which sometimes wipe out half the field.

The Good Sam Roadside Assistance 500 Sunday afternoon almost avoided its fate, but finally, with one corner left on the final lap, it happened: Tony Stewart, defending his lead, blocked Michael Waltrip. The two touched, Stewart spun and flipped on his side, and set off a twenty-FIVE-car wreck.

Matt Kennseth in the No. 17 Roush Fenway Ford was luckily getting a push past Stewart on the high side when Stewart blocked low, and sailed across the finish line while mayhem erupted behind him.

Some cars wrecked and limped across the line; some were immobile. Nobody was injured, a testament to the strength of these cars.

The first 187 laps were almost completely trouble-free: there were only four caution periods: three for single-car incidents and one for debris.

Race officials took over an hour reviewing film to determine who had finished where, but Kennseth was confirmed as the winner in under a minute, as the Ford driver was all alone ahead of the chaos as he raced to the checkered flag.

Kennseth explained to ESPN that he was too busy driving his car to see what was going on behind him at the finish.

“Plate racing isn’t about the driver it’s about [crew chief] Jim Fennig and this whole team back here so I’m proud of those guys.

“I’m not sure how Tony [Stewart] got turned around sideways; I didn’t see a lot after that.”

Tony Stewart was entirely clear about how he got turned around. In an admirable display of honesty Stewart admitted the whole thing was his fault.

“I just screwed up. I turned down across Michael [Waltrip] and crashed the whole field; my fault, blocking to try to stay where I was at. I take one hundred percent of the blame,” he told ESPN.

“I was trying to win the race and I was trying to stay ahead of Matt [Kennseth]. Michael got a great run on the bottom, had a big head of steam; when I turned down, I turned down across his right front fender. Just a mistake on my part, but it cost a lot of people a bad day because of it.”

Denny Hamlin finished fourteenth, but he was happy to finish. He talked about how to survive a plate race:

“I am sure all my fans are frustrated, but it’s what you have to do—you give up the chance at a win, riding in the back all day but you gotta miss the wreck and that’s what I had to do. At the end was basically as all those guys were wrecking just go through them: slow, down let, them all crash, and drive around them and get to the start-finish line.”

Chase points leader Brad Keselowski avoided much of the mess and rolled home seventh, increasing his points lead by 14 over Jimmie Johnson, who dragged his broken car across the line in 17th.