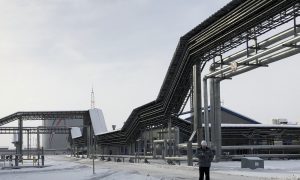 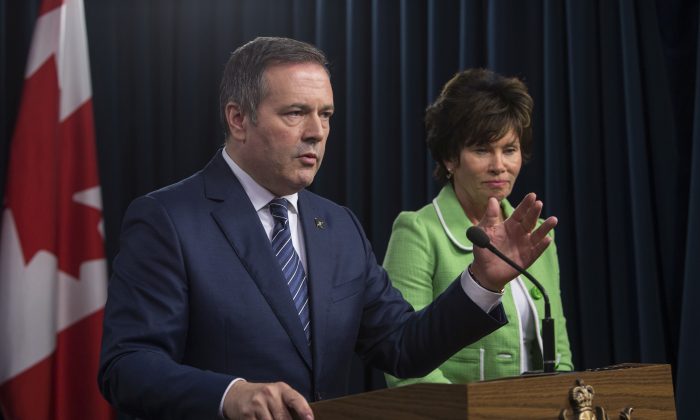 The foreign-funded campaign behind attempts to shut down Alberta’s oilsands has meant the loss of thousands of jobs and negative economic growth for the province, Alberta Premier Jason Kenney says.

Announcing the province’s inquiry into the Tar Sands Campaign, Kenney referenced research by Canadian investigator Vivian Krause, saying the campaign is financed by multi-billion-dollar U.S.-based foundations. Elsewhere, Kenney has pointed to international players who have a vested interest in impediments to North American energy exports.

“NATO has said that there’s clear evidence of Russian government activity to block gas development in Europe and to oppose pipelines in North America,” Kenney told media on the sidelines of the Calgary Stampede parade on July 5.

Last year, Kenney said that “it’s no coincidence that Russia is a major oil exporter and has an interest—as do other countries, like OPEC countries—in preventing both Canadian and American oil and gas from going to global markets and competing with their products.”

Krause has been researching the funding sources for organizations bankrolling campaigns against Alberta oil—including legal battles to stop pipeline projects and even successfully sway election results against pro-energy factions—and has come to the conclusion that the aim of the campaigns is to land-lock Alberta oil. She notes that, ultimately, these efforts don’t reduce global oil consumption because other producers have supplied the market need, but Canada is losing out in the process.

She has said some of the organizations involved have in the past helped American oil companies.

But among the companies named by Kenney as financiers of the campaign, many are well known for their efforts to hinder the energy sector in the United States as well.

Some of the names of the companies and individuals listed by Kenney—who noted there are many others—include the Rockefeller Brothers Fund, William and Flora Hewlett Foundation, Oak Foundation, Sea Change Foundation, Tides Foundation, as well as American billionaire Tom Steyer. Kenney said Steyer, who recently announced his bid to run as the Democrats’ candidate in the 2020 presidential election, “has spent over $200 million to get the U.S. to veto” the Keystone XL pipeline project.

With the tangled web of financiers and different potential motivations of foreign actors who want to see the collapse of the economy in Canada, the inquiry, headed by forensic and restructuring accountant Steve Allen, is meant to follow the money and shed light on the different players involved.

According to author and Epoch Times contributor Trevor Loudon, Russia is heavily involved in anti-fracking campaigns in Europe and North America. In a recent article, Loudon says Russia wants to keep Europe dependent on Russian energy and weaken the U.S. economy.

“Russia has successfully stopped fracking efforts in Eastern Europe through phony environmentalist and media campaigns, and is now attempting to disrupt the surge in American natural gas production that is quickly bringing the U.S. into energy independence,” said a paper by Washington-based Capital Research Center.

Another report, by the National Review, found that in 2015 alone, Russia’s state-run media RT published more than 60 anti-fracking articles.

In 2017, two Republican congressmen requested that the U.S. government investigate Russian links to Bermuda-based company Klein Ltd., which was reportedly funnelling millions of dollars to the Sea Change Foundation, which in turn funded anti-fracking campaigns. The Sea Change Foundation was one of the organizations named by Kenney that have funded campaigns against Alberta’s oil.  Klein Ltd. has denied funnelling Russian money to environmental causes.

Kenney cited a recent U.S. Senate report confirming that Russian actors led a coordinated online campaign against the energy sector in the United States, saying it “begs the question, are they doing the same thing here in Canada?”

“We do know that there are foreign-funded special interests, like for example the Tides Foundation, that have spent tens of millions of foreign dollars in Canada, fighting our energy industry and global access through pipelines,” he said.

China has also been cited as using environmental groups to obstruct North American energy. Loudon points to a 2018 probe by Republication leaders of the U.S. House Natural Resources Committee on potential “undue influence” by China over a U.S.-based environment group. The group has repeatedly sued the U.S. government for rolling back environmental regulations the government saw as unnecessarily impeding business.

“If pro-China environmental groups can weaken the U.S. economy with over-regulation and the elimination of cheap fossil fuels, China will soon have an economic (and military) advantage over its No. 1 competitor: the United States,” Loudon said.

Many of the entities named by Kenney are known for funding leftist causes in the United States and other parts of the world.

David Rockefeller, one of the founders of the Rockefeller Brothers Fund, was known for his internationalist causes, having once said he is proud to have worked toward creating “a more integrated global political and economic structure—one world, if you will.”

The Tides Foundation, based in California, was founded by American philanthropist and political activist Drummond Pike, who is known for financing progressive causes.

One of the most prominent funders of the Tides Foundation is George Soros, a globalist billionaire. Soros has been active in different parts of the world to bring about fundamental changes.

He financed the “Bulldozer Revolution” in Serbia in 2000 and is said to have been instrumental in overthrowing Georgian President Eduard Shevardnadze in 2003. He is reported to have played key roles in both the Ukraine conflict with Russia and the Arab Spring movement, among others. In the United States, Soros is a heavy financier of Democratic candidates and funds anti-Trump groups.

His name has also come up in financial crises in various countries that benefited his bottom line. During the Asian financial crisis in the late 1990s, he was accused by Malaysian Prime Minister Mahathir Mohamad of causing the collapse of the country’s economy with “massive currency speculation.”

Samantha Peck, spokesperson for Alberta Energy Minister Sonya Savage, says there’s been a “deliberate and targeted” campaign to land-lock Alberta’s oil for over a decade, and the new inquiry is meant to bring to light the full extent of the money, people, and organizations involved.

“This campaign to land-lock Alberta oil has caused over a decade of reputational harm to Alberta’s energy sector—limiting the revenues of the province and industry operating within our borders and costing us thousands of jobs,” Peck said. “If this inquiry helps us uncover the sources and ultimately stop this campaign, it will be well worth the effort.”

The inquiry is part of Kenney’s broader “Fight Back Strategy” that aims to combat campaigns to stop Alberta’s oil production. The strategy has included the creation of a “war room” to counter reports and “misinformation” against Alberta’s energy sector, and the creation of a fund for the use of pro-energy sector Indigenous groups in legal battles.

The final report resulting from the inquiry is expected in July 2020.